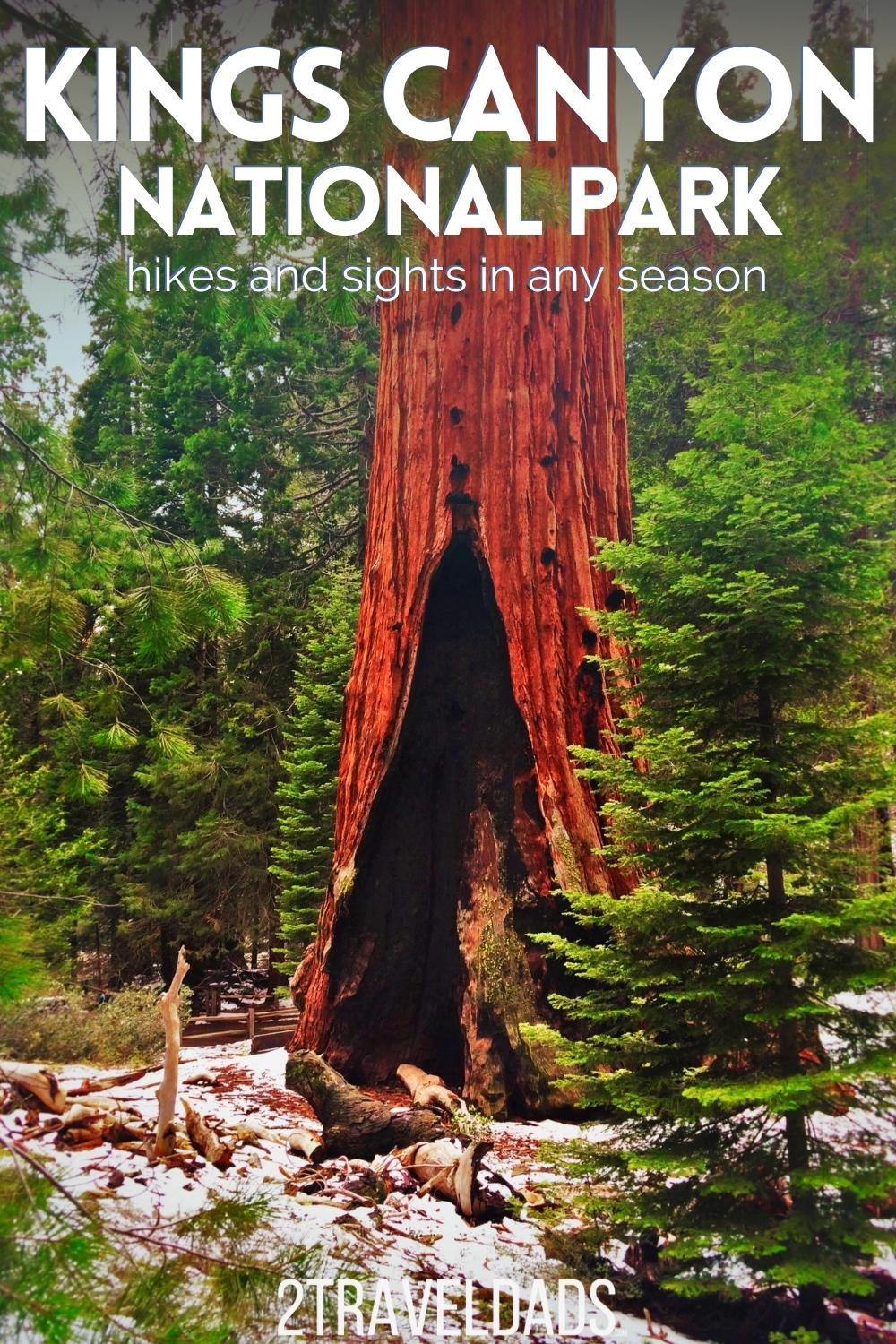 You know when you’re excited for sweeping views, spring flowers, newborn baby animals and getting your first tan of the year?  That’s where we were at prior to driving into Kings Canyon National Park.  As we drove up into the hills from Fresno, California on our Mountain National Parks road trip we felt the temperature drop, but it was still sunny.  We watched the darkest gray front move over the mountain tops…

And then we got into Kings Canyon National Park and it was freezing.  As we wound up the mountain on our way to Sequoia National Park we went through fog, hail, rain and dead still air.  It was eerie. But hey, it’s included with your National Parks Pass so you might as well explore a bit, no matter the weather.

We got our National Parks Passport stamps here in Grant Village and had the best talk with the Park Ranger about all of the things we could do… if we stuck around for a few days and allowed the 80 degree weather to roll back in.  Since that wasn’t going to happen, we explored more of the exhibits.  The Grant Grove Visitors Center had some of the best wildlife informational displays we’ve seen in any National Park, including really beautiful bronze casts of some of the creatures you’ll see in the park.

The highlight of the Grant Grove Visitors Center was perfect for our family:  a mural room.  We often see murals in zoos and science centers, so finding such a great one here was a treat.  The mural was beautifully painted and was synced up with a soundtrack of Kings Canyon National Park, with loads of creature sounds chitchatting at you as you circle the display.  This was a highlight of our visit for Elliott, our youngest.

Tip:  there’s this sweet-spot age with young kids where they are genuinely enraptured in Visitors Centers before they get super wild and just use the Visitors Center as a playground.  Use this time to give them some hands-on exposure so they can start to make connections with the nature they’ll see outside.

We have a new-found addiction to giant sequoia trees, so visiting the Grant Grove was wonderful for us.  Having just come from Sequoia National Park and having those sequoia groves fresh in our minds, we can confidently say that the Grant Grove is very different and worth the visit, even if you think you just can’t look at another tree.

Need to Know about Trails in Kings Canyon

There are a few options for how to approach the grove, including some trails that lead you away from the primary area.  We stuck to the well-designed loop since we weren’t sure if we were going to get hailed on at any moment, but next time we’ll for sure explore further.  The loop takes about 45 minutes and offers plenty of variety when it comes to the forest’s sights.

One sight we particularly enjoyed that wasn’t on the main loop but just off, was a fallen sequoia that was fully hollow and really cool to explore.  This fallen giant varied from the Fallen Monarch (below) in that it was still early in its decay process and showed the structure of the tree better.  Oliver, our oldest, wanted to climb all of the way to the end of the tubular tree, but I nipped that in the bud real quick.

Wow!  You know when you see something from a distance are you’re like “That’s cool.  Moving on…”  The Fallen Monarch in Kings Canyon National Park is not like that.  It’s really incredible.  You can walk inside it from end to end; in fact it actually can split the Grant Grove loop trail if you’re looking to have a shorter walk.

This tree is in its final stages of decay and really tells a history, from the holes in the roof to its fire scars.  It’s worth traversing the roots and stuff inside to experience it from end to end.

Tip:  remember that you’re in nature and there aren’t many constructed storm drains, so an enormous pipe like the Fallen Monarch acts as an aqueduct for snowmelt and rainfall.  Basically, your shoes may get SOAKED walking through.

It’s really grand.  Like, really.  The General Sherman tree in Sequoia National Park is incredible, but it’s among many other large trees that are pretty close and block in the canopy of the forest quite a bit.  The General Grant sequoia has few other giants directly next to it and its enormity is well understood.

Tip:  the trail takes you past the lower side of the tree, but if you take the detour trail up the hill a bit, you get to view the HUGE fire scar on the General Grant tree.  It’s a testament to the incredible forest you’re in and makes you feel small and fragile.  Seriously, this little trail gives you big perspective.

Accessibility to the General Grant Tree

The trail from the parking area up into the Grant Grove is well maintained and not too steep.  The pavement is ideal for wheels of all sort as long as you’re sticking to the primary loop.  It’s pretty clear where you shouldn’t go because the path is ROUGH directly off the main trail.

Note:  we did take the stroller off-roading through the Fallen Monarch, but it was only because we knew we could help each other carry it out.  If you’re flying solo or using a wheelchair, um yeah, don’t attempt it.

Like I said, we had big plans for hiking and seeing several amazing sights in Kings Canyon National Park, but since we didn’t get to visit them, we’ll just give you some good ideas for a visit when the Park is fully open.

Hiking with kids is tricky, because you need to be sure that there is either loads of interesting stops along the way or something they’ll love at the end.  Our plan was to do a nice hike in the Hume Lake area to get an incredible view of Kings Canyon, but that didn’t play out.  This would’ve been great for the streams, wildflowers (Oliver loves flowers) and potential wildlife.  Oh well, next time…

And we were going to do a hike in the Redwood Mountain Grove, but that stinkin’ snow and cautionary tales from the Rangers…  More on this grove below.

There are several other groves of giant sequoias you can visit if you haven’t gotten your fill yet.  The Redwood Mountain Grove is south of Grant Village and is the largest in Kings Canyon National Park.  There are a few different trails for hiking and are less visited or developed than Grant Grove.  And there are other groves too (Cedar Grove being close to Grant Village)… because the Park is amazing.

There are several campgrounds and small lodging establishments within Kings Canyon National Park, but we didn’t camp on this trip because it was spring… and it was cooooold.  We did stay at the John Muir Lodge in Grant Village and it proved to be a great option for us.  It was close to the activities were were able to do and we had a comfortable place to unwind.

On our next trip, we’ll be camping for sure and will share those details when it happens.  And we know how to prepare for cold camping, so we for sure will be ready!

Kings Canyon National Park is a really cool place to visit.  It’s very different from Sequoia National Park and will impress you in different ways.  In the off season, a day or two is enough time to experience the highlights we mentioned, but it does seem that in summer three or four days is more appropriate.

Have you been to Kings Canyon National Park?  What are your tips?  Leave a comment to help us fill our weather-filled gaps.

Kings is a family favorite. We have lots of fond memories from there. It is like a mini Yosemite Valley with a beautiful meadow, beautiful trees, beautiful river, some beautiful waterfalls, and great swimming holes. Hume lake is great….a wonderful beach and a huge log (it’s been there for years) that kids work to seize … with some enjoying being “ruler” of the log, and others helping others to the top. It is fun for all ages. With little ones 2-4 days is good; many trails at Kings go to the back country and require supples. Although backpacking families claim it is good with many trails not being too difficult. Jumping into the river from Muir rock is the ultimate experience although not usually encouraged or recommended by rangers. Safety 1st and foremost and be warned the water is always freezing. I’m actually surprised I’m sharing all this; my favorite thing about Kings is the beauty of the Sierras without the crowds. Hopefully you can get there again towards the end of summer, it is worth the visit!

Hey guys - I know I don't comment on all of your stuff, but I just wanted to pop in and say that I read just about every post you write. I hate being foiled by the weather, although these days it's a bit easier with teens. They think they'll melt in the rain, but we can just leave them behind and enjoy a quiet, muddy hike. So we've never been to Kings Canyon or Sequoia National Park, and we didn't love our Yosemite experience. It seems that it's time to give that road trip another go. Thanks for sharing all of your adventures with the world!

Thank you! Yes, they are must-sees. We're completing our Yosemite articles now. The key there is to go in spring when it's all waterfalls and fewer people.