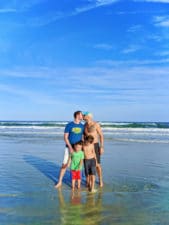 Our mission is to normalize non-traditional families and promote acceptance of loving, caring people no matter the family makeup.

Our goal is to encourage families like ours to be visible in the world, traveling beyond their comfort zone in safety, and to pave the way for the next generation of LGBTQ people to be confident is creating the family that’s right for them wherever they are.

Despite amazing progress in LGBTQ acceptance and normalizing our community as a welcoming part of life, there’s still so much work to be done. Upon moving to Florida in 2020, our eyes were opened to the reality of living in a non-blue state. Before that, we’d encountered hate and prejudice rarely, but intensely.  With the rise and loudness of “45” supporters our family’s differences became even more visible to us.

Although we’re seeing major changes in the public mindset and treatment of people, both societally and personally, we still aren’t comfortable being openly ourselves everywhere and have to exercise caution in certain places. Our history makes us wary of people in stereotypically violent/conservative places, places that LGBTQ people and families haven’t been welcome in the past.

“Why so cautious? Things have never been better for the LGBTQ community?”

In 2016, we faced more opposition and backlash than we ever thought possible or might ever have to deal with, and we are fortunate in comparison to the trials others in the LGBT community have faced.

In less than 48 hours we received more than 200 instances of being called pedophiles and other awful names, getting location specific threats about having the kids taken away, and 50+ death threats. And that’s just what came through to us via email, blog comments and Twitter.

Why? For two days we were the face of Tylenol and their part in LGBTQ activism for Pride month. We were thankful they were aware of what was happening and trying to prevent it from hitting us, but with everything the internet was spewing, they couldn’t stop it all. They were blocking and reporting the public threats as they happened, which we didn’t even know they were doing it at the time. And they didn’t have visibility to the threats and hate speech being sent to us privately.

A few days later in a conference call they apologized for the threats and bullying they couldn’t catch, which then made us realize how many they were able to actually stop and report. They handled the situation with great care and tact, but it really brought to light that we’re still in the midst of a bigger battle than we realized.

We know that the internet gives people the courage to be trolls and let their true colors show, but this event was a solid wake-up call about how many people still genuinely hate people like us and want to see the LGBTQ community silenced.

Standing up to bullying

We all know people (besides us) who are gay or Muslim or in an inter-racial relationship or so many other things. You have NO IDEA what other people are facing and what’s impacting them.  You don’t know how they’ve been damaged by others’ actions and comments in the past.  We need to spread the message of shutting down thoughtless talk and hate speech, even when somebody may not intend to be downright hurtful.

Following the initial burst of threats and harassment, I (Rob Taylor) was brought onto the Anthony Cumia Show (no longer on air), a syndicated radio broadcast. He made a tweet about the Tylenol ad which then spiraled immediately and generated more than 50 tweets and tags calling us pedophiles and saying awful, horrible sexual things about the kids. He talked about the situation earlier on his show and then apologized directly for the turmoil he created.

He said that he can’t predict what’s going to happen fifteen steps down the line. I told him him that it was only one step away from him. I said that’s why you have to think about what you say, especially because most of us in the LGBTQ community have experienced thoughtless jokes and comments our whole lives and we know where they head.

Even paired with his apology he said that he could’ve made another joke right then but didn’t. Great. Just saying that is still a damaging statement which perpetuates the problem by suggesting to others there’s more to hit and hurt with.

Shutting Down Harassment at the Source

Joking, words, and subtle actions can have a wider reach and deeper impact than you think. A quiet joke between two friends can be the boost of confidence one of them needs to bully somebody else (or a societal group) more aggressively or more publicly.

All of this applies to everyone in any aspect of life. Sorry, it doesn’t matter if it was “just a joke,” that joke is so much more.

The point of sharing all this: be brave and shut people down who are saying awful things or making dumb jokes. Don’t be tolerant of little things that you think “oh, I wouldn’t have said that” or laugh when somebody chuckles at the stupid things “the former guy” aka Florida Man says.

Until this situation occurred, the death threats and the threats of losing the kids, it didn’t sink in for me why Pride and social campaigns are so important in making change in this world. The one or two harassing comments we get per week are nothing compared to the full arsenal of what people think, will say, or would do if they had the power or platform. There are so many more people in this world that are full of hate and intolerance than any of us can comprehend. It’s tough to take the high road sometimes, but the payoff is much greater than you know.

Read our full article on Why PRIDE Matters for more experiences and information.

We will be fine. Words are words. In the meantime, don’t sit silently when you hear something thoughtless or damaging. Shut it down. Whether it’s a gay joke, a racist joke, a comment with thinly veiled bigotry, end it at the source.

If everybody stopped others from being hurtful, imagine how much better life would be for all of us.

Our advice to any family wary of the world out there

Be brave and visible. It may feel daunting putting yourself, your family, your love on display every time you leave the house, but it’s worth it. The more you do it the easier it is. And the more visible we all are, the stronger our community becomes for future generations.

And if you’re worried about going beyond your comfort zone, about traveling to new places where you don’t know what to expect or if bullying or hate crimes lie in wait, do your research and make the journey. We never tell people to go places they will face danger, but we do encourage people to dig in and find out if their thoughts or prejudices about a destination are accurate. We were shocked being a gay family in the South and being welcomed, with very few moments of discomfort in total.

Just start traveling; get out there. Gay family travel is very different from what a traditional family will experience, but it gets better with time and confidence. You cannot change somebody’s perspective on life or understand another’s culture from your couch. You can’t perfect your traveling style and know how to do it well just by reading other peoples’ blogs.  You have to pack up the kids and go.  Catch a plane.  Jump on a boat.  Hit the road.

There is no better teacher than experience. There’s no better way to impact the world around you than to be out in it. 🙂