When people ask us where our favorite places to return to for family travel are, we’re pretty quick with our answers:  Cabo San Lucas, Disneyland, Georgia/Florida…  Georgia and Florida?  Like, the South?  Yes, it’s true.  We’ve written before about how the South is changing and how it’s worth giving a second chance, and we hold to that.  What is it about family travel in the South that these gay dads keep going back for?  We’ll tell you:  history, warmth, and exposure. 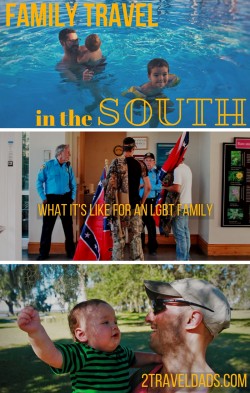 A little history – the South is some old country.  We live on the West Coast of the USA, so don’t have many old buildings or cool, historical forts to visit, which make family travel so cool for us.  We get those things when we hit up the Southeast.

And if you don’t know much about United States history, here’s a quick snippet about the area: from colonization until the Civil War in the 1860s there was slavery.  It was intense, it was awful and it was everywhere (but mostly in the South in the Confederacy).  Fast forward to the 50s and 60s and then the Civil Rights Movement took hold and the world opened up for non-white folks all over.  Things have gotten progressively better, but there are still loads of issues and tons of folks who still hold onto racial tensions strongly.

Story:  we went to Stone Mountain Park outside of Atlanta.  It was a beautiful day to snap some family travel photos at sunset looking out at the Atlanta skyline.  It was also a great day for Confederate sympathizers to hold a protest against the placement of a Dr Martin Luther King Jr monument on the mountain.  While we only caught the end of the protest, it was a reminder of where we were and that this same group has strong animosity towards families like ours and that they’ve taken violent action in the past towards members of the LGBT community.  It added a level of caution to our gay family travels. 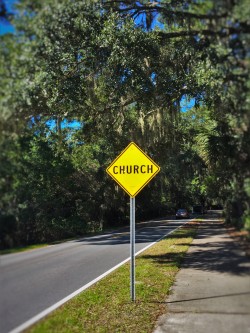 Do you know what else is in the South?  A lot of churches.  A lot.  The nickname for the region is the Bible Belt.  This is both good and bad.  It’s wonderful because you have very strong communities who really make Southern Hospitality shine as bright as can be.  It’s bad because many many many of these communities remain set in their exceptionally conservative ways.

What does this mean for us as a gay family traveling through these communities?  It actually doesn’t mean too much.  I know, you were expecting something dramatic, but it’s not really.  Sure, we definitely get the standard looks that any gay dads are (sadly) used to and we get the long pauses before people asks us questions or start to say something gay family-oriented, but we’ve not experienced much that’s outright awful.

Something funny:  the population that attends church in Georgia is so large that there are warning signs on the roads close to churches.  These aren’t directional signs to inform you of service times, but warnings as in “A whole lotta people are going to be getting out of church soon; there’ll be traffic and pedestrians everywhere; please watch out.”

Story:  Chris was pushing our youngest in the stroller trying to get him to sleep while were were having a day at Jacksonville Beach.  There was a man holding a sign up to him telling him to repent of his sins.  The end.  Nothing more happened, but it was awkward and reminded us that even the beach we were on was still in the South.  You’ll experience that odd interaction in any city no matter who you are; it wasn’t just because we were the only gays with kids at the beach, but it again reminded us that we were in the South. 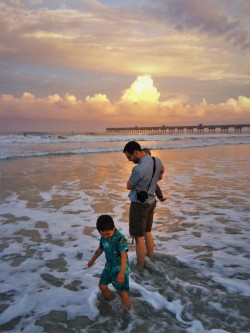 Warm water… and people – we mentioned before that the strong sense of community in the South is behind the well known Southern Hospitality, but the hospitality goes beyond church picnics.  We’ve stayed in several hotels in the South and had great experiences.  Recently we stayed at the Casa Marina Hotel in Jacksonville Beach and were welcomed without question.  The staff in the hotel and the different restaurants we dined at were all super friendly and treated us like normal customers.  It was great to not have awkward questions about “where’s their mom?” or “so, who’s the father?” during dinner.  Yeah, that sometimes happens at really inappropriate times from servers in restaurants… but not when we were in Florida this time!  And the people we met at the beaches were warm and friendly too, like the water.

Story:  the one awkward moment of being gays with kids in a restaurant actually came from some other guests, and it wasn’t even to our face.  Me and our oldest simply said hello as we passed a group of ladies and then sat back down at our table.  Immediately I heard one say to another “My sister is a lesbian now.  I don’t know when THAT happened…”  And then there’s me: SMH (that’s apparently slang for “shakin’ my head”).  I’m sure that’s the perception of many around the globe regarding the LGBT community, but when it’s said with a Southern accent, it’s, well, it is what it is. 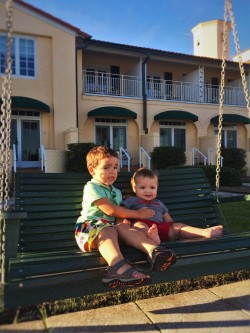 We did have completely ideal interactions with every guest service, restaurant and tour employee when we went to St Simons Island, Georgia on that same trip.  And every single person we met, hotel guests or random strangers, was completely congenial and didn’t give us a second thought, and if they did we didn’t catch it.  It was really great.  We stayed at the King and Prince Hotel directly on the beach and could watch all kinds of people playing in the surf daily and there didn’t seem to be any families like ours anywhere.  Even though our perception was that we were a novelty among the rest of the Island’s population, we sure didn’t feel like it.

Story:  when we checked into our hotel and I said that my husband and kids were in the car I got the best reaction ever:  “Okay, I’ll hurry so you guys can go relax…”  There wasn’t a drop of a questioning tone or a second look.  I was sure to refer to my “husband and kids” because as a travel writer, I am always looking for what could go wrong or could be wonderful.  The King and Prince staff passed every test (thank goodness). 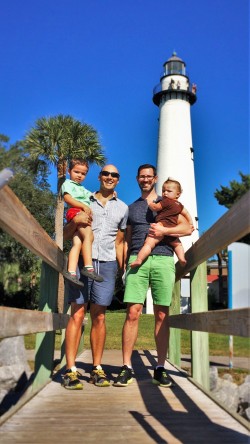 Exposure – we’re not talking about spending too much time in the sun and getting burned to a crisp, but exposing the world around us to US, gays with kids.  For our family, that’s a big motivator for traveling out:  to show the world that we’re a fun, normal family just like anybody.  Going places like the Southern USA, we’re an obvious minority and might be the only gay dads many people will see in who knows how long.  In our blog, our motto or tagline is “2 dads raising their 2 sons and traveling the globe, giving the kids a broad world view.”  It’s true that the kids are benefiting from our travels too.  Yes, others get to meet us and see that we’re different from them, but the kids also are learning that the world beyond Seattle isn’t a liberal, welcoming, inclusive place.  We don’t want our kids to fear the world, so we strive for them to understand the many views people they’ll meet will have.

It’s true that traveling to a highly religious area may hold some surprises for kids that aren’t exposed to that normally.  It’s also true that history can be tough to break from even when it’s morally bankrupt, but in either case it’s our job to prep the kids for their own adventures someday as they could come across like situations, so might as well start now. 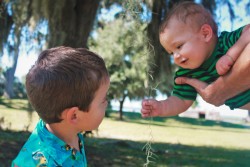 Overall, the South is a great family travel experience for these gay dads and their kids.  We’ll keep going back and enjoying all that there is to do and see, all of the people that there are to meet, and all of the food that we don’t get at home (but that’s a whole other article to write).  We want gay families to feel encouraged and empowered to venture someplace new, but proceed with your wits about you.  Go show the world that LGBT families are a part of society and that we love to enjoy new places just as much as anybody else.  And you know, the South is a great place to discover and enjoy.

Interesting read. I am gay and originally from the middle Georgia area but live in the DC area with my husband. We are looking for an area to eventually retire. DC ain't it! We were considering coastal Georgia.

Coastal Georgia, or at least the Golden Isles, has been a wonderful destination for our family. Both in the towns and at the resorts we've not had any experiences that have rubbed us the wrong way.

St Simons has a gay bar. It's an awesome island. Even though it's a southern island it has a very northern vibe.

I'd really like to go explore more of the south...I have some family in Georgia just outside Atlanta and would love to check out places like Savannah.

Great post! We have been hanging out in Northen Florida for the past few months and have loved Southern Hospitality. People are very helpful and the service in hotels and restaurants have been great. We have gotten a few eye rolls when people hear we are from California and the billboards can be a little off-putting but it's opened some fantastic conversations with our boys about tolerance and diversity.

As a Southerner I'm so glad to hear that you guys both love the South and are encouraging other LGBT families to visit the South. Like anywhere in the US, the South has it's problems, but you are so right about the warm culture of the people and the abundant history. You've got me jonzing to go home now ;)