My husband and I aren’t shy people.  We do karaoke, take the kids to nice restaurants, wear Euro-style swim trunks, hold hands as a family in public…  You know, we’re not crazy but we’re not shy.  This includes traveling to potentially homophobic places.  We don’t intentionally put ourselves and our kids in harm’s way, but we also don’t avoid rural America because we’re gay.  A lot of our friends or acquaintances have asked us how we were received when we visited here, or did people look at us funny when we went there.  I can count on one hand the times it’s been awkward or uncomfortable.  I can count on many hands how many times people have been welcoming.  It’s funny:  I get more snappy or hurtful comments about being a stay-at-home-dad when it’s just me walking to our local beach than when all four of us are together.

Here are three things to consider when traveling beyond the city: 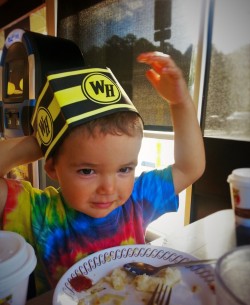 The world is changing – having family in Georgia, it’s a frequent destination for us.  Over several trips, I’ve never encountered or even seen from afar another family like ours.  We’ve hit destinations like the Georgia Aquarium, Centennial Park and the MLK National Historic Site.  Yeah, it’s always just us.  We’ve jaunted to Chattanooga. Yep, still just us.  We don’t get weird looks or anything though.  I know it’s a big generalization to say that the South is accepting of two dads taking their kids on vacation, but truly, nowhere has made us feel out of place.  I’m sure that if we tried to book a room at a B&B in Columbus, GA we’d be wary of what’s in store for us (see below), but as a broad statement, we haven’t faced homophobia in the South.

We get unfair treatment – it’s true.  Airport security knows that we pose no threat.  TSA ladies are happy to help wrangle baby gear for two guys that look frazzled.  We get extra smiles and a tad bit of preferential treatment from gate agents and flight attendants.  It’s unfair to other travelers.  At hotel check-ins, staff is happy to help us beyond the standard. I can say this because I’ve traveled alone or with just my husband, and having kids with you truly does change the level of service provided.  Seeing gays with kids, as condescending as it is, people want to offer more help than needed…and it’s okay to accept it. 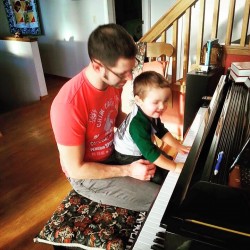 Traveling out – Living in the Seattle area, we’re blessed with a really open society where there are gay families all over and we’re rather ordinary.  Step beyond the city though, and we become a bit of an oddity.  I made the broad statement that the South is changing and open.  I’m not going to apply that to rural America.   While we’re met with open arms in the airport or tourist destinations, it’s not always so when vacationing on the prairie or need a room late at night.

Two stories:  We booked a B&B in the Columbia Gorge area of Washington State. Upon check-in with our son in hand, the owner repeatedly asked us if we wanted a second room or two beds.  Even after checking in and unpacking this continued.  Although the rest of the conversation was pleasant, this kept coming up.  We checked out after one night.  Our other unfortunate encounter was on a drive to San Francisco when we had to stop driving for the night and pull off The 5 into Cottage Grove, OR.  Despite AAA’s assistance in booking, upon arrival, the lady at the desk continually questioned our family situation and insisted in giving us two beds even though she openly admitted there was the availability to have a room with one bed.  Late at night with a tired child, you don’t fight it.  If you’re not in danger and there’s nothing else you need, you just go to sleep. 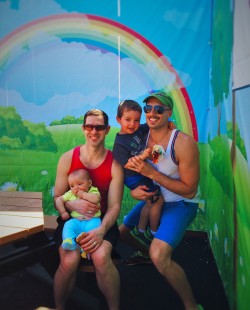 The moral of these stories:  remember that while you may be used to being treated normally at home, in another society you don’t know what you’ll find.  Don’t let that discourage you, but be prepared to face potential opposition.

Traveling is important to our family for many reasons beyond relaxation: it ensures that our kids see other places and people that are different than they know, and it teaches them to not be shy to venture into somebody else’s world.  If we only ever go to progressive, metropolitan places, how will the rest of the world ever catch up?

As a non American, it is good to hear that you feel safe in your own country. It is unfortunate that you are getting these comments in rural areas, but you seem to be taking these as learning opportunities for others to grow. My only knowledge of America is through the news and this is a fresh perspective. thank you