We’re always sharing the positive side of family travel and being two dads, right?  Every now and then we add a dose of reality by looping everyone in on what it’s like to be an LGBT family in unpleasant places or awkward situations, but did you know that even in a world as progressive as ours is today our family still faces more serious ridicule and threats?  It’s true.  Typically it’s few and far between, but in conjunction with celebrating PRIDE this year and working with Tylenol, we faced a monsoon of hate.

On Sunday, June 26th, Tylenol shared our family photo with the world.  It was just a snapshot in time of #HowWeFamily.  It was a risky share for such an international company, but bold and we were so happy to work with them on it.  Here’s what their tweet looked like: 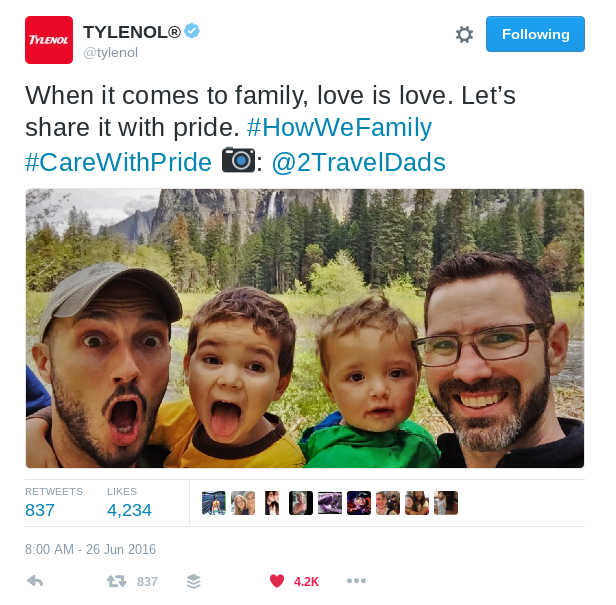 It was a message of positivity, family and celebrating the amazing world we live in; celebrating the life we get to have due to the progress made, both by individuals and the Supreme Court of the United States last year with their major LGBT equality ruling.  With over 4200 likes and more than 830 retweets, thousands across the internet showed their support and love for LGBT families all over.  #LoveWins…

The dark side of the internet

Every week we get a mean tweet or a nasty blog comment where somebody chooses to spout profanity or tell us they think our family is wrong, but that’s easy to brush off and discount as one person who is having a bad day or just not into loving humanity, but…

On June 26th, this same trolling behavior spiraled into uncontrollable hatred.  In about 12 hours, we received more than 200 direct tweets, emails and blog comments screaming at us about how disgusting our family is, how we should be ashamed that we’re raising kids to share in our perversion, and how badly our kids need a mom.

Yes, words, but words can hurt, and this was only the start.  We also received more than 80 tweets and messages calling us pedophiles, making reference to us passing AIDS onto our kids, and threatening to work to have our kids taken away.  To add to that, more than 50 death threats came through to us via a variety of sources, and some even came with pictures.

Yeah, that was a tough day.  Never before has our family truly felt hated and in danger.  We got past it, reported everything we could to Twitter and authorities, and blocked and deleted all of the horrifying blog comments and messages.  Sometimes, you just have to move on.

So many things to say, but I’ll just share a few examples of what people spewed at us.

First off, neither of us have HIV/AIDS and if we did, that’s a health situation we’d need to manage privately and would not warrant any sort of public comment.  In the meantime though, people felt the need to use this as a means of derogation and attack, ranging from snarky comments about Tylenol not curing AIDS or our “life choices,” as well as saying that our kids have to live with AIDS.

This is both ridiculous and ignorant.  Ridiculous because there is no humor to the HIV/AIDS epidemic and making light of the situation isn’t funny.  Ignorant because not all gay people have HIV/AIDS.  Something that we’ve seen over the years is that many people, either because they want to remain uninformed or because they want to perpetuate a stereotype, people say all kinds of things about the gay community to try to make us seem untouchable.

There’s no better way to separate people than with fear, and unfortunately many people inappropriately use the HIV/AIDS epidemic as a way to drive a wedge of fear between the gay community and those who don’t know us.  Fear is a horrible tool that too many use.

Sexualizing our kids and calling us pedophiles

The most hurtful, heartbreaking aspect of the awful behavior of the trolls was involving the kids.  The first publicly visible instance came from a respected radio host who made a thoughtless joke that anybody could see would spiral into something much worse. 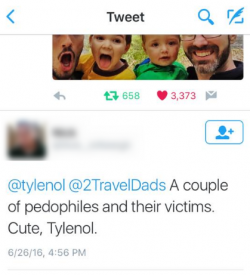 The initial public tweet stated that our oldest has the same mouth as me… which within seconds turned into an outpouring of horrible comments about the kids being raised by pedophiles, the kids being sexual assault victims, and also that the kids perform sexual acts.  One person said that our oldest has “D.S.L.” which you can look up the definition here if you must.  It’s awful.

Never before had I seen jokes and comments made like this, about our kids or any other.  There were a lot of tears.  And fear for our family, as many other people started commenting and tweeting that the kids are “victims” and that they should get placed with other homes.

There was much, much more, but this paints enough of a picture that if you’re not squirming and aching for the situation, hearing more won’t have an impact.

Note:  the tweet that started this one particular thread was retracted by the radio personality and he made a public apology, including having me on his show to talk about comedy, propriety and the public attitude, but even in that he set up another joke with me still on the line.  That’s the behavior that has to stop to make an impact for the better.

I’m not going to share images of this because it’s beyond terrible and nothing I want anyone to see, but as an example we were sent several messages and tweets that showed men being thrown off roofs, waterboarding, and being beaten.  Why would anybody think any of these actions are okay, let alone send these images to us?  Were we actually in danger or was this all just people spewing violence and hate because they were bored on a Sunday afternoon?

No matter the reason, it hurt us and we were shocked and saddened that people would ever do this, hypothetically or in real life.  Did the kids have any idea that this was happening?  Nope.  There are times when you’re a parent, particularly of young kids, that you just need to keep your chin up and deal with the mess in the shadows.  Someday I’m sure we’ll share this aspect of our lives that they don’t know exists, but we’ll try to spare them of it as much as possible.

Trolling in our own community 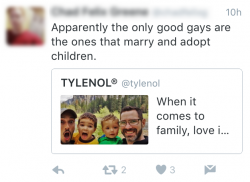 You’d think that the LGBT community would also stand together, especially when there’s so much hate and horror towards so many of us.  Well, we even got trolled by those within our own group.  While the notes and tweets from the LGBT community weren’t threatening they were hurtful.  To quote just one:  “So now only the the good gays get married and have kids” which then spiraled into a string of quotes and tweets of self-shaming and criticism.

It’s difficult to hear members of your own community proclaim how they feel like outcasts because they’re not married with kids.  You know what?  So many people in all aspects of society aren’t married with kids, and that’s totally fine.

That same afternoon, I sent an email to Tylenol asking to chat about the day, but I wasn’t sure if they’d had visibility to much of what had gone on.  The next morning when we talked, they offered the most heartfelt apology and let me know that they were indeed monitoring and filtering what they could as the hatred poured out.  Their sincerity was real and much appreciated.  I felt relieved… and thought to myself “OMG, if they’re also blocking and filtering, how many horrible threats and messages have actually been sent?!” 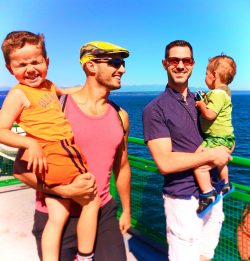 We’re going to keep on sharing our family’s stories and experiences, despite the reaction and words from so many.  If we don’t keep being a positive force in the world, no matter how small, how can we ever teach our kids to do the same?

Tylenol wants us to continue to share #HowWeFamily and they’re willing to support our efforts to normalize LGBT families everywhere.  It’s awesome to have support from such a widespread brand.  Going forward, we’ll all be a little less shocked when the internet trolls bring their A-game, and we’ll also be a bit more ready to deal.  It just makes us stronger, right?

Ultimately, our goal is to help shape the world into a place that our kids look back on things like this and say in shock to themselves “Why in the world did you ever face any problems?  What was the ish?”  We’re a long way from that, but we’ll just keep working at it.

And if you want to check it out, we were recently interview about what it’s like to be two dads.  Take a look and maybe we’ll answer some of your questions!

I’m so sorry that you had to go through such awful hatred. I really hope the world is changing for the better and will become more open minded and accepting in the future – although sadly I think that ignorant people will always be out there.

I just discovered your blog and I love it! It’s obvious that you guys love your children and that you are wonderful and caring dads. I think the travel adventures you are taking your kids on are amazing and I wish you all the best!

What an awfull experience. The comments are ridiculous. Your children are more openminded and are going to change the world. Be thankfull for that. I knew there are people like the people who comment on your picture, but that it was that bad... Whatever other people say, you are two perfectly normal guys who are married and have children.

Oh my goodness, those Tweets!! Awful. Awful. I just recently found your blog. I'll be following along on your adventures! All the best!

You know, I can't understand why people feel the need to tear others down they don't even know. It's a terrible waste of time. I hope that social media companies do a better job in the future with identifying this type of hate and blocking it. People comment on your kids behavior because they are truly wonderful kids. You guys are fantastic parents doing do much so right. Those that can't see that, well, that's their issue...

Absolutely heartbreaking. What is wrong with people? love wins!