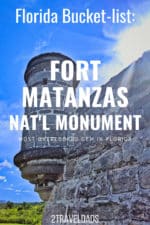 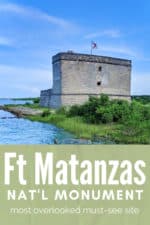 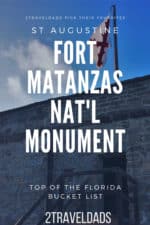 The city of Saint Augustine, Florida is remarkable and full of history. There are so many things to do in St Augustine that you’ll never be at a loss, but for a special experience you MUST visit Fort Matanzas National Monument. Because it’s not directly in downtown St Augustine, it’s often overlooked but offers a variety of things to do and learn. We really love Fort Matanzas and sharing it with others visiting Florida’s Historic Coast.

Be sure to listen to our podcast episode all about St Augustine Beach, including Fort Matanzas!

Where is Fort Matanzas NPS?

Only about 20 minutes south of St Augustine, Fort Matanzas sits directly on the Mantanzas River.  The river is actually an inlet, a part of the inner coastal waterway.  Either way, Fort Matanzas sits on the water with Anastasia Island, a barrier island, separating it from the Atlantic Ocean.  The land is pretty marshy, but beautiful.  If you’re visiting Daytona Beach with kids and want to plan a day trip to the Saint Augustine area, it’s an hour’s drive north and it’s totally worth it.

Be sure to check out our article about hotels in St Augustine for recommendations for where to stay nearby, include camping just fifteen minutes from Fort Matanzas!

Tips for a successful visit to the Fort

You can just show up of course, but remember it’s located on a marsh so there are bugs.  Not at the Fort per se, but depending on the season and time of day the mosquitoes can be crazy. We’ve visited when there hasn’t been a bug in sight and we’ve had to run through clouds of mosquitoes. It’s a gamble, so be prepared with bug spray or protective clothing.

Another suggestion for having a great visit to Fort Matanzas is to keep in mind that Florida is hot. Going early in the day or at the end of the park’s operating hours is ideal.  Check when the last boat leaves though, as it’s not too late in the day (maybe 4pm). The Park Service office is air conditioned and they offer a film to watch before visiting Fort Matanzas, so if you need a break before getting on the water, be sure to stop.

First off, Matanzas means “slaughters”.  Yeah, let’s start there.  In the 16th century there was a massacre and a lot of Frenchmen were killed, so the river took on the name.  A century later, the Spanish were trying to keep the land and the British were being all greedy and they would fight and shoot cannons at each other and so on, so Fort Matanzas was built.

Like the Castillo de San Marcos fifteen miles north in St Augustine, Fort Matanzas is built from coquina, a stone quarried in Florida made of compressed shells and natural mortar. It’s pretty cool to look at up close.

The fort was active from 1742 until the last Spanish soldiers left (only three of them) in 1821. Fort Matanzas continually changed hands between the Spanish, British and Americans for the duration of its use.  Busy place, that fort.  It survived lots of attacks and hurricanes, but really took a beating.  From 1821 on out it was held by the US military but wasn’t being kept up.  It even weathered the US Civil War and remained mostly standing.

Eventually, it fell into decay and then became the first building in US history to get federal funds for the purpose of historic preservation (shared with Castillo de San Marcos).  Pretty cool, huh? Thank goodness it got funding to rebuild and restore.

How to actually get to the Fort

From Florida A1A you drive (or be really cool and bike) into Fort Matanzas National Monument.  Spanish moss is everywhere and since you’re just off the beach, there’s a nice breeze that makes the moss sway.  So cool.

You’ll head into the park headquarters and check in. Once inside, you’ll get a boarding pass for the ferry, you’ll get a stamp in your National Parks Passport, and then you can talk to a ranger or watch the short film about Fort Matanzas.  When the ranger tells you, you head outside and RUN to the ferry dock to avoid the potential mosquitoes and you’re on your way!

Once down on the Matanzas River, you board your pontoon ferry across the water to Fort Matanzas.  Be sure to watch for pelicans, fish, manatees, dolphins and more.  We were wishing for manatees… but settled for bombarding pelicans, which were super cool.  We crossed, docked and then headed up the ramp onto the island and onto Fort Matanzas.

While you’re welcome to do a bit of walking around the fort, but you can’t go too far.  And remember the rules of the National Parks:  NO MEADOW STOMPING.  The reason you’re there is the Fort though, so you need to head up the stairs.

There is more to Fort Matanzas National Monument than the stone structure. It’s actually a great place to experience wildlife and history side by side.

While the fort is the main reason you’ll be visiting Fort Matanzas NM, the nature trail into the coastal hammock forest is really cool. The trail system is primarily on a boardwalk and it winds trough palm trees and towards the river. What makes it worth your time though is the wildlife.  It is located directly next to the parking area, so should be visited after you’ve secured your spot on the ferry over to the fort.

When it comes to wildlife, between large birds of prey hanging out in the forest (including great horned owls) and huge black racer snakes sitting on the palm fronds directly next to the path, it’s actually a really exciting trail. Keep your eyes peels and observe the palms carefully for critters.

Tip:  watch out for ENORMOUS spider webs, as the golden silk spiders create huge webs. They’re beautiful and unlike any we’ve seen anywhere else. There are so many cool spiders in Florida!

Once at the fort, you’ll find that the view from the top is amazing:  looking down river towards the Atlantic Ocean and north towards St Augustine.  Pelicans and osprey are flying everywhere.  It’s so quiet, except for the occasional truck cruising down the highway a mile away.  Since you cannot see the highway, the view is pretty much what those original Spanish Solders saw 300 years ago.

On the first level, the park ranger will share the history of Fort Matanzas, a bit about the construction and how it came to be what it is today.  It’s one of the better ranger talks we’ve attended.  Once you’ve learned a little something, you can explore.

Note:  Fort Matanzas isn’t huge like the Castillo de San Marcos to the north.  While it’s nice to sit and enjoy the view, exploring the actual structure doesn’t take more than 20 minutes.

There are three levels you can explore:  the first has cannons and a lookout with the soldiers’ quarters , the second is the officers’ quarters with a nice view of the river and marsh, and the top of the tower is only accessible by ladder.  As an adult, the ladder was a bit creepy, but our oldest made it just fine with hands-on support both up and down.  The Spanish flag still flies at the top of the tower, but that’s just for show.

Tip: if you’ve got the strength to climb the ladder, do it.  The rungs are farther apart than you’d expect, so know that you need to be pretty dexterous with your feet/legs to make it to the top.  Once you’re up there, the view is striking and totally worth the climb.

We really enjoyed just hanging out at Fort Matanzas.  It was great for allowing kids to roam in safety and get imaginative and explore.  We grown-ups enjoyed the history, the scenery and the people we met.  And since everybody rides the boat together and you can’t come and go all willy-nilly, you make friends.

Over all, Fort Matanzas is a wonderful afternoon adventure.  Allow up to two hours to do the boat ride and exploring the Fort.  Be sure to do the nature trail too. It’s definitely worth the time and the drive, so go!!

Other activities near Fort Matanzas

Across the highway from the entrance to the National Monument is Matanzas Beach, and just to the north are Bulter and Crescent Beaches. A bit further up in Saint Augustine Beach you’ll find the Alligator Farm and St Augustine Lighthouse, both are great with kids.

Just to the south is Marineland where you’ll find Ripple Effect Ecotours, with amazing kayaking through the Intracoastal Waterway.

If you have any questions about visiting Fort Matanzas National Monument, feel free to leave us a comment or send us a note. And don’t forget to pin this for travel planning your trip to Florida’s Historic Coast!

Great post - love off the beaten path gems like this! Manatees would be amazing! A little nature, a little history - perfection (except for the mosquitos! I have not missed those living in Copenhagen!)

Reminds me of Ogrodzieniec Castle near Krakow, Poland! That's another similar place to hang out!

Our list of sites to visit in Europe grows by the day. I think we need a three year trip to see 60% of what we'd like to.

You had me at manatees! Sounds like a fun place, but really sad you didn't see any manatees.

I love the view from the top of the fort and that you can do a boat ride as well to see it. History and fun all in one, perfect for kids. If you ever come to Europe, you guys are so going to love it, since you love historical sites.

A great day trip for boys and those views from the fort look lovely for the parents!