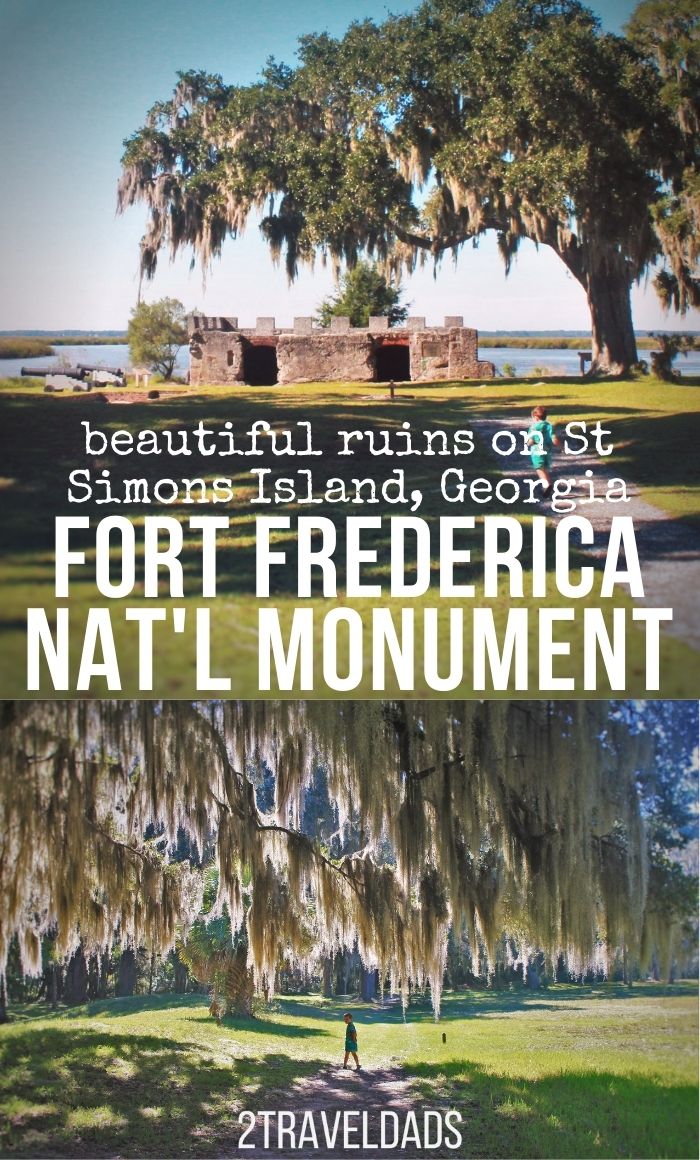 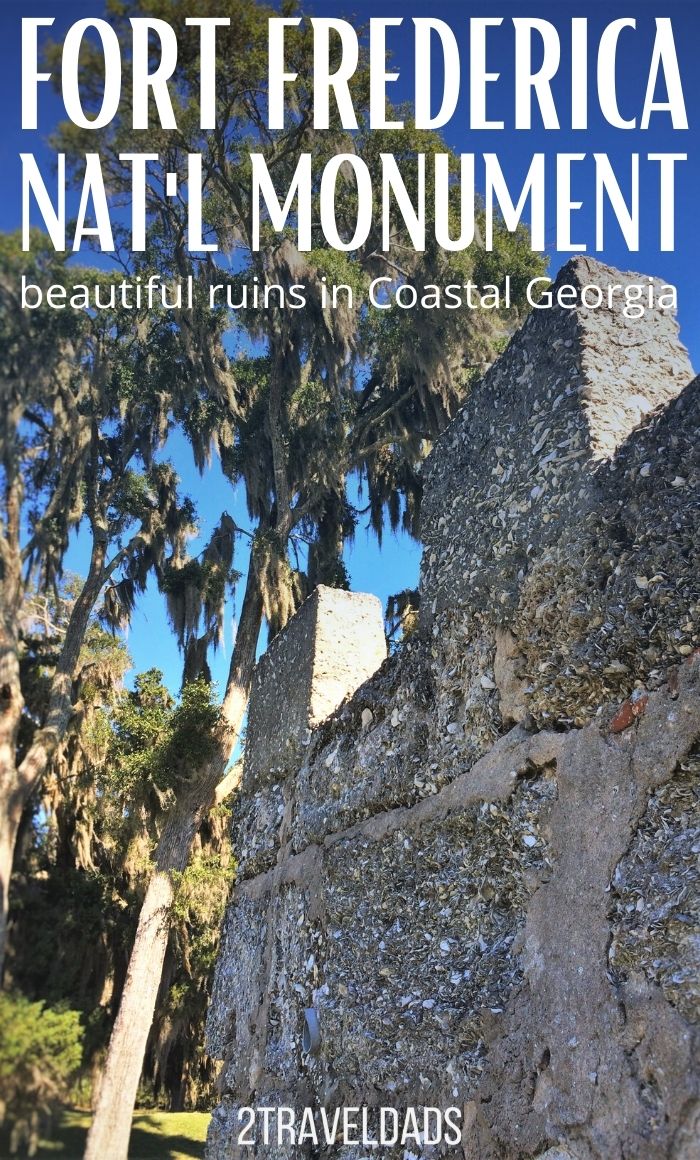 The Golden Isles are a wonderful destination along a Georgia Coast road trip. They are beautiful and full of history. Fort Frederica National Monument is located on St Simons Island in the Golden Isles, and is a gorgeous spot to explore, especially on a sunny afternoon.

Historical sites rock for traveling new places with kids.  Here’s why:  they’re a snapshot of a moment in time that we’ll never experience again.  Sometimes those sites are really well preserved and you can step back in time with little use of the imagination.  Heck, sometimes there are even folks in costumes to help you imagine.  And then sometimes you visit an historical site that is all but gone, like Horton House on Jekyll Island or Fort Frederica on St Simons Island, Georgia.

Where did it go?  If it’s gone, should you still visit it?  We’ll help with some answers and tips for visiting Fort Frederica in the Golden Isles of Georgia, but let’s just say first that it is totally worth the stop and even something you should carve out time for…as long as you’ve already had a beach day.  Anyways, keep reading because yeah.

In the early 18th century, the British, Scottish and Germans joined forces to build a fort and town on St Simons Island, Georgia.  Why?  Because the Spanish were hanging out to the south in Florida and were enjoying their position of control on certain shipping lanes.

The history of Fort Matanzas down in St Augustine is that it kept switching hands between the Spanish and other countries.  Not so the case up north, as the British maintained control of Fort Frederica and the Golden Isles consistently.  The fort and town functioned until there was a mutual understanding of who was in control of Georgia and Florida and the fighting subsided.

Peace spread through the Southeast.  With peace between the British and Spanish came the disbanding of the army in the area.  With no troops and no reason to stay, the town emptied and then over time disintegrated into ruins, leaving only a few fireplaces and part of the actual coquina fort. In 1936 it was declared a protected site and then became an actual National Monument in 1945.

Another site to see:  the Bloody Marsh is between Fort Frederica and the rest of St Simons Island’s sightseeing areas.  If you want to check out a battlefield (and more Spanish moss) make a twenty minute stop here too.

Approaching the gate to Fort Frederica National Monument, you’re faced with none other than Spanish moss.  Everywhere.  It’s probably the main reason that we love the South.  As you walk through the breezeway of the visitors center, you step into, what we would call a ghost town.  We say “ghost” because the town is gone.  There are foundations of a clearly planned out town, but ALL of the buildings are gone.  At the end of Broad St lies Fort Frederica.

Fort Frederica is only one building now.  There are no bastions, no barracks.  There’s not much left except for one building.  It’s still cool to visit though.  Our oldest thought it was nifty like Castillo de San Marcos in St Augustine, but his attention wavered once he went in and out of the small fort once.  There were cannons too, but not at cool as others he’d seen at the Castillo or Fort Matanzas.  These ones were painted for preservation’s sake and not as interesting in craftsmanship.

Besides the small part of the fortress that’s left standing, there are the ruins of the barracks to the north of the compound. Another fascinating structure to picture in your mind’s eye and imagine living in a few hundred years ago.

The most exciting part of the whole compound is actually the wide open spaces between the Spanish moss draped trees.  We enjoyed being able to relax and sit in the shade while the kids played.  The setting was perfect for an afternoon of family travel and relaxation.

There are display boards throughout the grounds, highlighting what each of the building foundations is from.  There are also street signs in the middle of the fields, as you can easily tell where the town’s roads were, both from the layout of the foundations and the neatly planted (now enormous) trees.

The rangers keep the kitchen/medicinal garden maintained, as well as the orange trees. You know, it’s all actually pretty neat to see, especially in fall or winter when the oranges.

Things to do at Fort Frederica

Despite Fort Frederica being mostly ruins, there is actually quite a bit to do and see. Allow yourself at least an hour to roam the grounds and explore. Starting at the Visitor Center, learn about the history of the Golden Isles and Fort Frederica. While you’re there, pick up a scavenger hunt to guide you around the National Monument area.

Walk the oak alley pathways, visit the fortress, check out the cannons, do some bird watching on the marsh, complete the scavenger hunt… You’ll actually have plenty to occupy you.

There is a lot of picnic space at Fort Frederica, so plan ahead and bring lunch or snacks to enjoy in the shade. Sitting beneath the live oaks is one of our favorite Georgia activities, and they’re perfect here! Oh, and don’t forget to get a National Parks Passport stamp!

Is a day at Fort Frederica worth the time?

Yes, but only if have an unplanned afternoon on St Simons Island and you’ve had your fill of beach time.  The historical factor is great and it’s a completely different experience than you’ll get at the other colonial forts in the southeast. The scavenger hunt makes it really fun for kids, so that’s a bonus.

We’re not going to say that it’s the coolest place we’ve ever been, but it beats a day walking through a suburban mall.  If you’re not into history, Fort Frederica is ideal for strolling and capturing all kinds of pictures of the beautiful park, and for the relaxation factor. Fort Frederica is one of the most relaxing historical spots in all of Georgia.  No joke.  Utter chillness flows through the shade and the Spanish moss.

You can get to the fort either by car or bike.  We had a great time biking across St Simon’s Island to get there and it’s our solid A+ recommendation for anybody else wanting a fun day out in the fresh air. The bike ride from the St Simons Island Lighthouse to Fort Frederica is 7.5 miles and should take about a half hour to bike there (15 minutes to drive).

See what other cool things there are to do on St Simons Island beyond Fort Frederica.  The Golden Isles are great for family travel, and the mood is very relaxed everywhere.  Go explore and see what other sites catch your fancy.

Sounds interesting. Your description reminds me of how I felt about Bangalore Fort - just a small structure left with tons of history

I have been to the Golden Isles once but was too young at the time to appreciate historic tourism. Interesting read and I learned something, the most important thing in my book. Cute family. ;)

Wow I love history so this is very interesting! Great post :)

We could’ve written so much more about the history. Such an interesting place. Working on another post now about the rest of St Simons Island.

Love the format of this post! I am headed to Georgia in April and will definitely check this out!

Very interesting history on a place is never heard of! I'll heave to head down to Georgia from Virginia. Very well written!