Since we’re a part of the Huggies Parent Council, we’ve gotten to share some pretty cool programs that help families all over, from supporting NICU nurses to the National Diaper Bank Network. With these and with the different products by Huggies, there’s a consistent goal: to make people, in particular babies, feel loved and supported, thus starting life on the right foot. 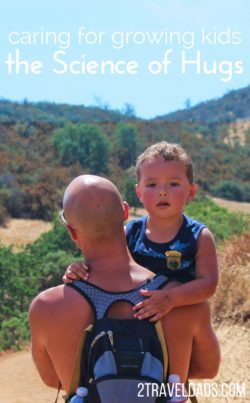 Recently I got to go on an adventure to Chicago where I checked out the city and saw my favorite painting at the Art Institute of Chicago, but then I also participated in a fascinating workshop around the science of hugs. Initially I was a little confused as to where it all was heading and then it clicked. Hugs are at the nature of family, and positive human touch is essential to the growth and development of babies… like our own kids. So we’re going to share a bit of the science behind hugs and why we are happy to work with the Huggies brand.

Note: We were engaged by Huggies to share what we’ve learned about the science of hugs and how it’s a part of the Huggies brand.

The Science of a Hug

If you know me (Rob) you know that I’m not a hugger, and while I’m fun and friendly, I’m not snuggly in any sense of the word. Well, I learned a few things in the workshop with Huggies that really made me think about myself as a dad and a person. Hugging and positive human touch are something that can immediately impact another person, in particular, impact children. I have those, you know, children, and after a morning of learning about neurons and hormones I understand why hugging my kids is so important.

When a baby is born, in most cases they almost immediately are hugged, just like they are when they’re still developing in the womb. This physical memory triggers good, happy chemicals in their bodies, which then help them develop both mentally and physically in a healthy manner. As kids grow, they seek comfort through hugs and show they love others through hugs. Those hugs then impact the ones being hugged, thus releasing more happy chemicals in the body, some of which help physically heal as they move through the body.  The hugging cycle continues all through life, but it starts out and is pivotal with babies.

Wrapping my head around this was the moment that I realized that I don’t hug my kids enough. Sure, we do our good morning and goodnight hugs and kisses, but I realized that I needed to consciously give more hugs and create more positive human connections throughout the day. Every day.  It’s the least I can do to help my kids grow up strong and healthy.

Note: to be scientific, hugging lowers blood pressure, reduces stress, boosts the immune system (the tummy area produces hormones), and increases oxytocin. In addition to hugging creating a stronger connection between a family, these other side effects promote actual physical health.

Hugs and growing as a family

Our lives are very busy. We’re always traveling and sometimes we get worn out. While I’d like to think that has no huge impact on any of us physically, that’s not true. Recently we had an experience where we’d been traveling with a very busy schedule for about four days. While four days doesn’t seem like much for an adult, when you’re a tiny person it’s a lot. We were enjoying the California sun and the sights of SoCal when it caught up with us. Our littlest got scary sick while we were still on the road.

After an unplanned afternoon in urgent care it was determined that he was tired and a bit dehydrated, but would be okay. The doctor sent us away telling us to make sure he got lots of rest and fluids… and hugs. She said that sometimes hugs are what can make the difference in a swift recovery or not.  At the time I thought she was silly.  Now I get it and I see how it really does make the kids (and us dads) feel physically better. Why did it take having a doctor tell me to hug more to actually do it?

I wasn’t particularly stingy with hugging my family before, but after learning more and thinking specifically about moments with the kids when they’ve been sick or injured, or tired or sad, I can say that I have now made a solid change in how I communicate that I care, and that is with intentional, increased hugs. Who’d have thought that a workshop around diapers and childcare products would impact how I interact with my own growing children?

When I got home from the trip to Chicago, the very first thing I did was head to the kids’ rooms to hug them and give them goodnight kisses. I was sure to hug a little extra long having spent a few days away and having learned so much about the impact of positive physical contact. I’d like to think it was my bonus hugs that made them each sleep a little longer than normal that next morning. Had to be.

Since then, I’ve actually gotten to talk to the kids (and papa Chris) about what I learned in the Huggies hugging workshop. And while we’re never going to force our kids to hug or kiss somebody if they don’t want to, we’ve incorporated offering a hug or a kiss between them to ease ouchies or show each other that they still care for one another after they fight. Hopefully they understand why we’ve been talking about this, but if not, it sure makes me feel good to see them showing kindness and positive contact between one another.

The hug concept in diapering

A different aspect of hugging and positive human touch we discussed in our Huggies workshop was diapering and establishing a caring connection with babies when you’re even just changing a diaper. Yes, we got to learn about the science that goes into creating sensitive wipes and Huggies diapers, which was really fascinating, but there’s more to it.

In diapering, you have this opportunity to talk to a baby and look them in the eyes. You’re exposing their delicate skin that’s quite sensitive and that you must be really careful with. This moment is a chance to show that baby that you care, even if they aren’t fully aware. With each diaper change, you cement that bond a little more which then helps them feel secure, calm, and supported.  That goes back to the science of hugging and how it positively impacts health.

Note: even though our kids are older and have been out of diapers for some time, I really appreciated hearing from a nurse, an expert in the earliest stages of babyhood, how you can do something as routine as changing a diaper and turn that into a healthy bonding moment. Hugging and diapering with complete care and awareness. It almost made me miss the diaper days…

Tip:  Huggies has different money saving perks for families, including for diapers. Visit Huggies.com for a discount on Huggies Little Snugglers, which are diapers inspired by comforting human touch.

Caring for kids on the road

As the kids have gotten older, it’s funny to think of the things that we still bring with us on our travels, either out of habit or because they’re comfort items. We’ve got our special snuggly stuffies and favorite sunglasses and such, but we also still travel with Huggies wipes. Yeah, I know that we’re done changing diapers, but we still keep wipes on hand because why wouldn’t we want to show our older kids the same care we did when they were smaller (and less dirty actually).

When we went to Disneyland this summer for the Cars 3 Premiere, we shared our tips for a successful day in the Parks including the many supplies we keep on hand. It’s as true now as it was then, as we board a plane for Hawaii or when we’re wiping cotton candy off the kids’ faces: we want them to be clean and healthy and know that we love them. A caring touch to clean up their crazy, messy selves is one way we continue to support them as they grow.

Tip:  if you want to be an extra cool adult, look for the Clutch ‘n Clean resealable wipe pouches. Our Lightning McQueen pouch goes where we go, and the kids think we’re more awesome than when we just had wipes in our backpacks. 🙂

I know that the chances to hug and show our boys that we love and care for them start to dwindle and change over the years, but I’m glad that we’ve gotten to establish subtle aspects of that care in everything we do. Like when they were babies and we got to hold them and rock them… [tears up and blows nose]

Wow!  I didn’t think I had so much to say about hugs and how learning about the science behind diapers and positive human touch has impacted me as a dad, but there you have it.

I hope you’re encouraged to be conscious of hugging and the wonders it does for kids (and adults alike). Clearly, I’m so proud to be a part of the Huggies ParentsCouncil and am happy to share what I’ve learned. I know our daily life has been affected by making the conscious effort to show we care more through hugging, and I can tell that as the kids grow, they’ll value this expression as much as we dads do.

Huggies – the fastest growing diaper brand in U.S. hospitals – believes deeply in the Power of Hugs, which is why every diaper and wipe is inspired by a parent’s embrace. The Huggies No Baby Unhugged program helps ensure all babies get the hugs they need to thrive by supporting hugging programs in hospitals and donating diapers across the country. Learn how you can help at Huggies.com/NoBabyUnhugged. #HuggiesCouncil #ad