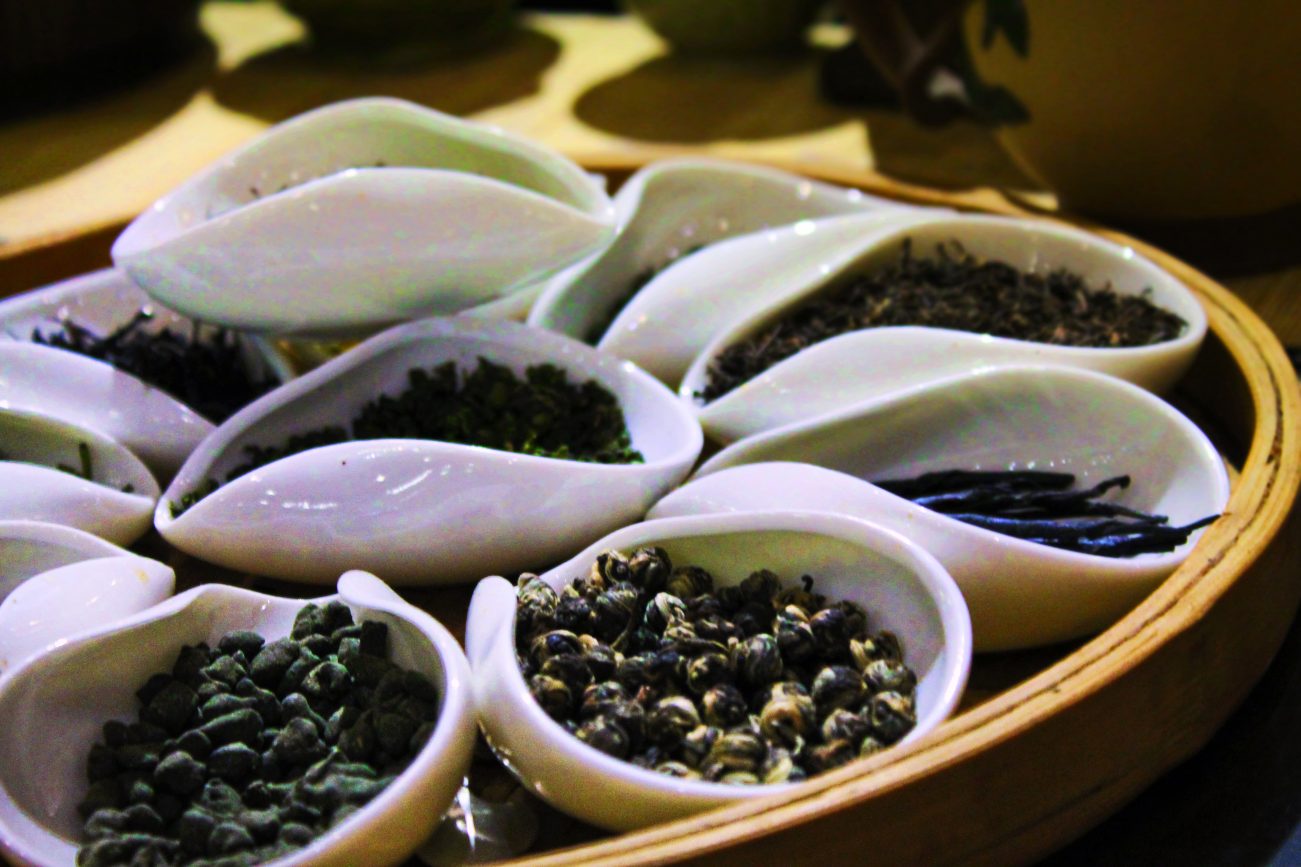 Growing up in America you don’t really learn about China.  You hear that it’s a Communist country far away, that the people live in desolate poverty and that the pollution is so bad that you must wear a smog mask at all times.  While aspects of these things are true, it’s totally not the case everywhere and was not the experience I’ve just had.  China surprised me.  My misconceptions about China were so off. 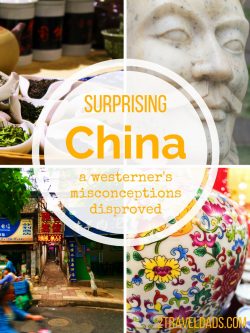 When I first heard that I was heading to the Shaanxi province of China, I was expecting to find destitute people wearing surgical masks as they hocked fake jade to tourists.  Nope.  I had heard not to eat the street food because it’s so unsafe and western stomachs can’t handle the spice and lack of food safety.  Not true.  The world had spewed so many misconceptions at me over the years that China was the most pleasant surprise I could ask for.

The very first sight we visited was the archaeological park for the terracotta warriors in Xi’an.  It’s actually an active dig site operating in unison with a museum; a very comprehensive national park.  True, the maintenance of the facilities within the interpretive center wasn’t to western standards, but the museum and dig aspects were well thought out and easy to explore without understanding Mandarin.  Totally doable as a westerner and very busy with Chinese citizens excited to explore and learn about their own country.

Note:  we did have a guide to give us the history of each sight we visited, both at the terracotta warriors and many other places, but with a little research and using the interpretive signs at these sights, there’s no reason to feel overwhelmed about visiting. 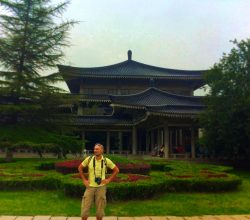 We also visited historical sites and parks that are not well known outside of China, and do you know what?  They were well maintained and ready to welcome foreigners, just like our sights and parks in the United States are.  Also, it seems that the Chinese are so happy to see foreign visitors excited to learn and experience the thousands of years of culture they have to share.

Disclaimer:  while most places we went were very westerner-friendly, some were more dangerous than we are used to.  When we visited Hukou Falls on the Yellow River in northern Shaanxi province, people could easily fall or do stupid things that could land them into the raging mother river of China.  We visit a lot of waterfalls and this one was quite the surprise.

Ultimately what I’m saying here is that China is much more tourist friendly than I expected and it was wonderful to see amazing things alongside the Chinese people. 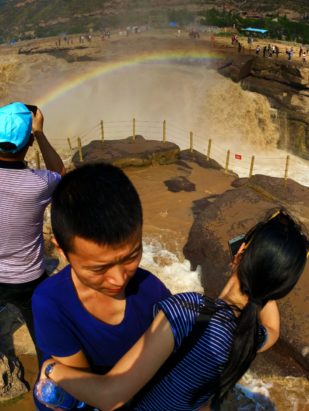 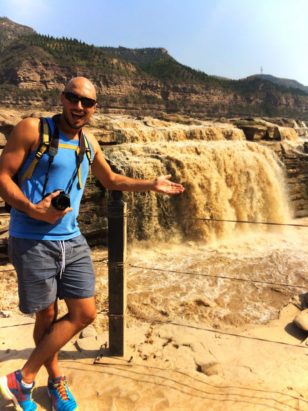 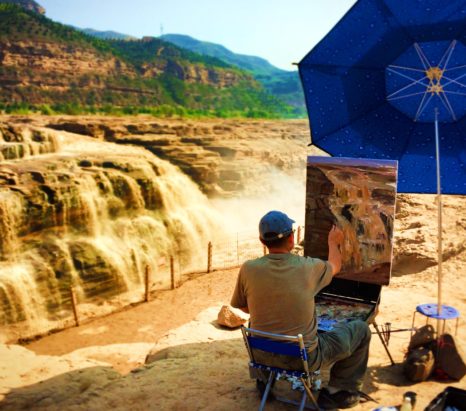 As I write this I’m sitting on a bus driving through rural China, somewhere between Yan’an and Xi’an.  You should see the beautiful blue sky!  And in Xi’an and Yan’an (tier 2 and tier 3 cities) we had blue sky too.  And rain and fog.  When we visited Huashan National Park, we were so high that we ascended into the clouds.  The day started foggy and we had blue sky before we were up in the mountain tops.

True, there was a perpetual layer of haze in Xi’an but not as bad as Los Angeles or even Seattle on a hot summer’s day.  There were random Chinese people walking around with masks, but they were so few and far between that it wasn’t a tenth as dramatic as I’d always heard.  Even in Beijing there was some smog, but it wasn’t strong enough to smell or make you cough, and again, people weren’t wearing masks.  PS:  when I flew threw Beijing on my way out of China it was the most beautiful day I’d seen in a long time. 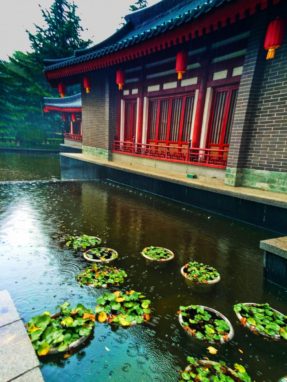 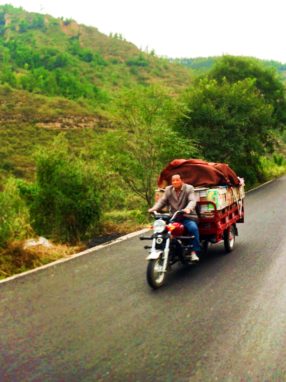 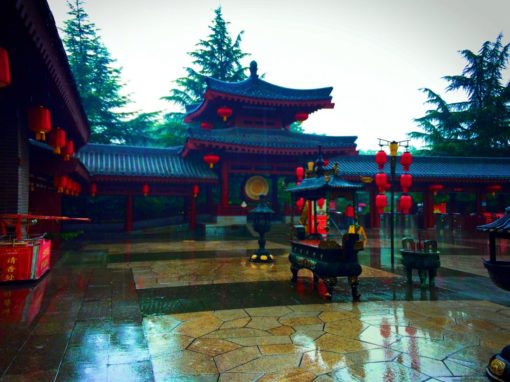 Note:  while talking with an expat who lives in Beijing, Richelle from Adventures Around Asia, she shared that the days when a smog mask are needed are few and far between.  She also shared that the masks people do wear typically aren’t the type to even be effective against inhalation.

Tip:  if you’re visiting when smog levels are very high (180 PPM+) the type of mask to use is actually a thick construction mask, as it has the density to filter the air and actually make an impact. 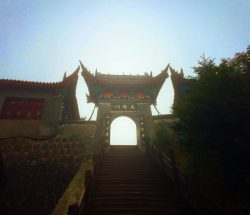 Another thing to think about is the fog.  Where we experienced the fog was all in areas with lots of water, with several rivers surrounding us and fluctuating temperatures.  These are the perfect conditions to create fog, which we did experience on a few days, with the fog dissipating as the day progressed.

I know, it sounds like I’m making excuses or trying to disprove actual problems, but I’m not.  Yes the pollution is very bad and a horrific problem that needs to be addressed, but the extremes and physical impact you hear about in the west wasn’t something we experienced.  I’m sure that on a different day or in a different province I’d sing a different song, but I’m talking about my experience and it was 99% different than what people warned me of.

And rain happened a bunch too.  Like, a lot, so the air was really clean from this too.  Argh, it’s tough to make a solid call on the actual air condition, but for us it was great.

Sidenote:  rain when you’re traveling is actually awesome, as it’ll give you some memorable experiences with a lot fewer people.  We experienced this in Venice, Italy and loved it.

More and more, food travel is growing in popularity or becoming the main attraction of visiting new places.  When you say “I’m visiting China and heading out into the countryside and…” people grab at their stomachs and start throwing warnings at you.  “Don’t eat on the street.  Don’t try anything you can’t identify.  Oooh, it’ll be so spicy there.  MSG…”

First off… I got to make my own yummy stuff!! 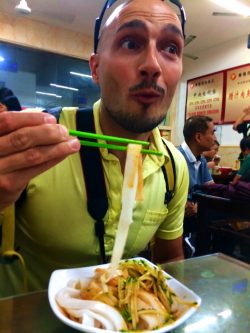 Firstly, OMG.  Mine eyes hath been opened and I see the light:  Chinese food in America is pretend.  Restaurants in the USA that I always thought had good Chinese food or were really delicious aren’t.  Outside of the random Chinatowns or International Districts in North America actual Chinese cuisine has been dumbed down for us.

From noodles to vegetable dishes to breads, there are countless ways to prepare everything that I’ve never ever seen in all of my Chinese food experiences in the USA.  The best discoveries have been fruits and vegetables that I see available in the USA but that are actually used in China.  Lotus root and dragon fruit are my new faves and I’m so excited to share them with the kids.  Oh, and getting to work with a Chinese man in a kitchen to make my own bun and then use a machete to cut my own noodles, yes, that’s the Chinese cuisine I want to remember and share. 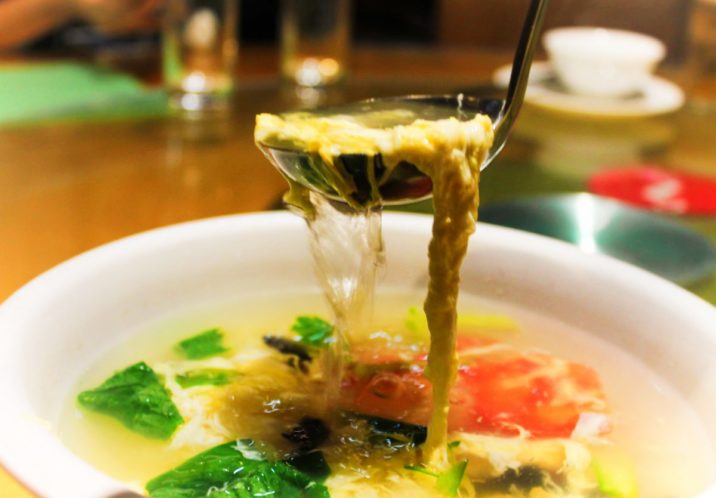 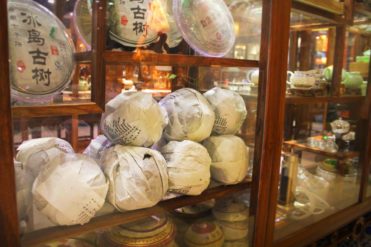 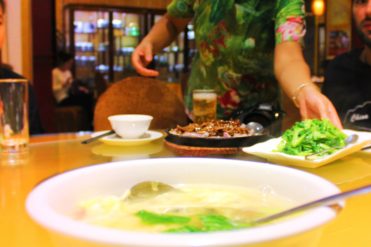 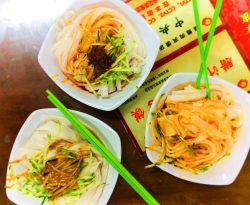 Yummy, yummy, yummy.  I’ve now eaten bunches of street food, ranging from dumplings to saucy noodles and there’s not been a single issue.  You can’t expect everything to sit right with you at every meal ever, and I’m talking about food in China AND in the USA.  Same thing when you’re talking about street food.

Of course you’ll want to be smart and not over-do it, but street food is kind of too amazing to pass up.  Also, food is one of the best windows into another’s culture, and when you’re in China, you’ll see that street food cannot be avoided. 🙂

Tip:  if you’re concerned about trying street food in any new place, not just China, ask a local for a recommendation or go to the food cart that’s the busiest.  You’ll be guaranteed something great. 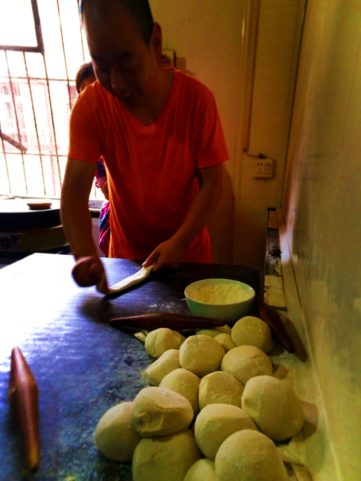 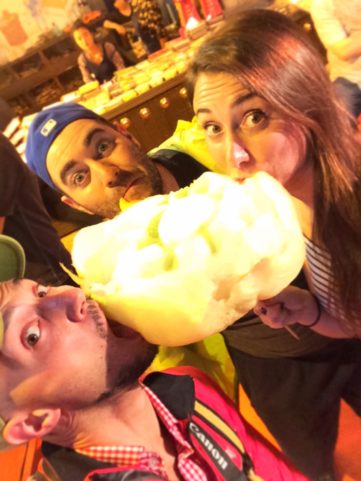 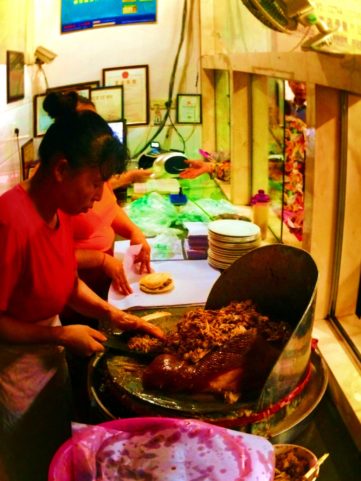 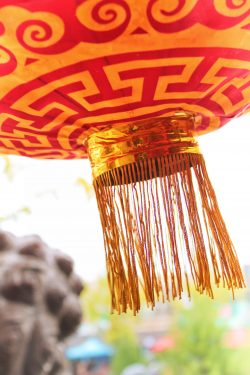 Okay, I did see a few weird things.  Regarding government and what we’re told about China and how oppressed the government keeps the people, well, that wasn’t visible traveling through Beijing, exploring Xi’an up close, visiting rural areas in the Shaanxi province or hanging out with the locals at the hot springs resort in Baoji.

Capitalism, both for businesses and consumers, seems very strong and everybody from the very young to the elderly take part in it.  Restaurants are bustling, tourist attractions are full of locals and foreigners alike, karaoke joints are hoppin’!  In talking with locals, they will say that they get frustrated with the government system and how people are placed in power (meritocracy), but neither the impression or statements from people are that they are held back or forced into things.  I’m sure others have misconceptions about China just like this.

Note:  upon visiting an art museum and gallery in Xi’an, there were some pieces by modern artists showing life in China, and one in particular stood out to me which was all about the one-child policy.  The message was clear and present and it was allowed to hang in a public gallery.  Interesting contrast of government control and free speech. 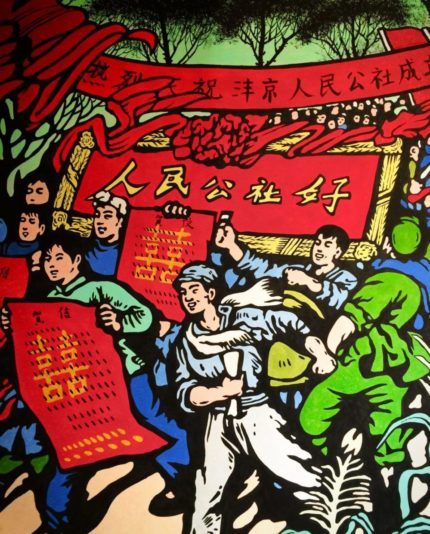 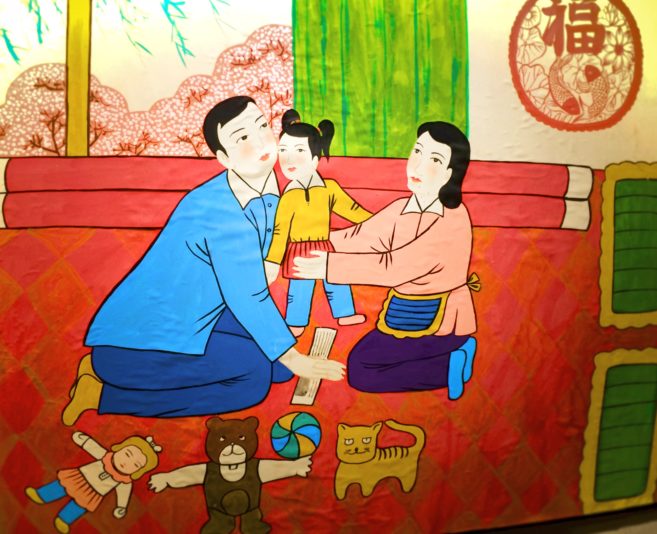 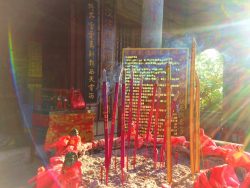 The one police issue I did observe was when a woman was caught gathering fruit within the National Park at Huashan.  They aggressively wrestled her down when she wouldn’t go with them and she fought back really hard.  She eventually did go with them.  While worse things than this happen daily all around the world, it was really shocking to witness as it was very violent and over just collecting fallen fruit.

The final thing I want to mention that surprised me about China and the oppression we always hear about in the west is religion.  True, Buddhism is the predominant religion in China, but while there I also saw several Christian churches, new and very old, as well as spent an evening in the Muslim quarter.  I had always been told growing up that Christianity and other religions were illegal in China, but that’s not the case.

Tip:  another way to gain insight into a culture, whether in Europe, Central America, Asia… is to visit their religious centers or places of worship.  China is easy for this as there are so many temples and pagodas that are open to the public.  Visiting the Famen Temple was very helpful for me in understanding Buddhism and its place in Chinese culture. 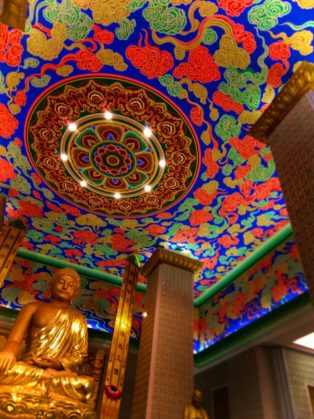 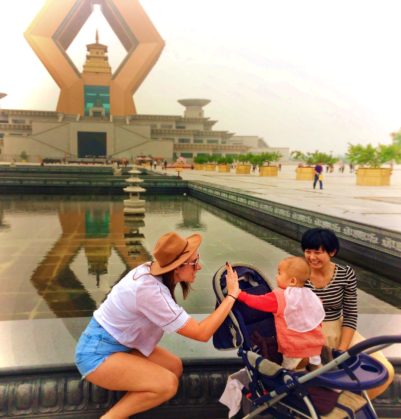 Sarah, of Coffee With a Slice of Life, at Famen Temple Shaanxi China 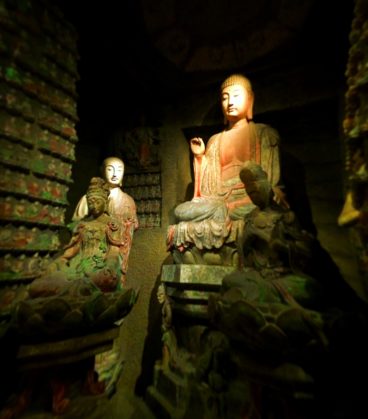 Yes, China has its problems and flaws, but it was far better than I could’ve ever hoped and the overall experience has left me wanting to return and explore more of this incredible, ancient country.  Surprising China.  That’s what people need to experience for themselves and the only way to do that is to make the trek to this amazing place.

This trip has been eye-opening and allowed me to understand how to prepare my family for a visit to China.  The country is very family friendly, easy to navigate and is a trove of wonder just waiting to be realized by western society.  My misconceptions about China have been thoroughly put to rest and I cannot wait to share all of my experiences! 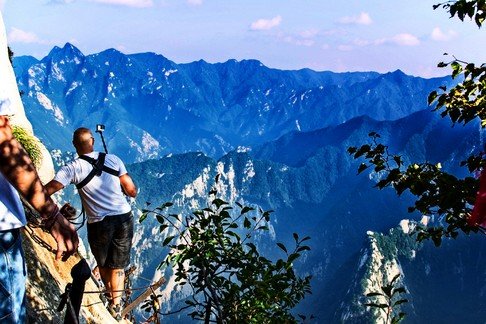 Planning a 3 Day Getaway to Victoria BC: breweries, gardens and more

The Santa Monica Pier: everything to do for a perfect afternoon 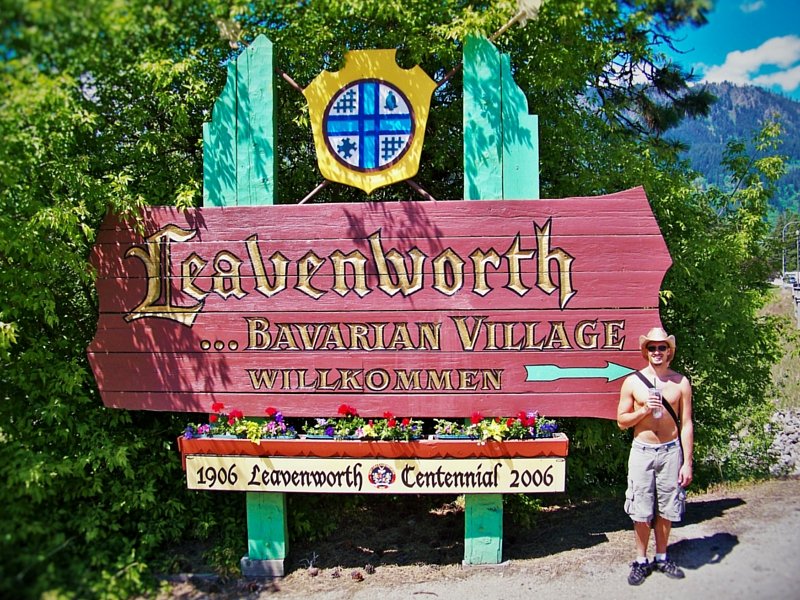 What to do in Leavenworth, Washington: the only guide you’ll ever need