One of our favorite things to do when traveling is to watch the sunset.  The mood changes, the people quiet down (usually) and you say goodnight to the sun.  And we do a lot of local travel, so Pacific Northwest sunsets have a special place in our hearts.  Here are some of our favorite sunsets of the Pacific Northwest from three totally different areas.  But really, there’s no bad sunset anywhere in the world, is there? 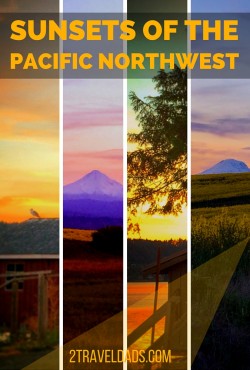 Disclaimer:  sometimes it rains and you don’t get a sunset, just an FYI.

A ferry ride and a half hour drive west of Seattle lies the small town of Poulsbo.  Founded as a Scandinavian fishing village in the 1880s, it’s not changed too much along the waterway.  There is still the blue and white Lutheran church watching over the town.  There are still fishing boats at the docks.  The residents still live and thrive off the water.  Liberty Bay is the setting for these two sunset images.  It’s a small harbour with a narrow outlet.  The tides are mellow and the Olympic Mountains loom above in the distance.  Both images are of private boat houses at sunset.  Structures like this dot the shoreline all of the way to the large bay, the Puget Sound.

Tip:  when visiting Poulsbo rent a kayak to explore Liberty Bay and see a great population of harbor seals spending their days on the docks.  Summer in Poulsbo can be busy, but that’s also when it’s the prettiest, so plan your visit accordingly.

Two hours east of Portland, Oregon, rising above the Columbia River is the High Prairie area.  It’s a collection of rolling hills separated by gullies and gulches.  The main farms here are canola and wind.  Wind farms power the communities of the Columbia Gorge and beyond, into wine country.  Canola farms bring brilliant colours to the hills at all times of day.  These images highlight the canola fields with Mounts Hood and Adams in the distance.  Notice the bee hive boxes near the canola field; a common practice on PNW farms.  Mt Hood is located in Oregon and is exceptionally pointed.  Mt Adams is in Washington State and is a slightly smaller twin of the rounded, more well-known Mt Rainier.

There are only a flew places that you can catch both of these mountains, and the High Prairie is one.  For the best views, find one of the many dirt roads leading the ridges with wind farms.  As you approach the windmills (do not trespass though), you’ll come to amazing, unobstructed views…almost all of the way to the Pacific Ocean.

Tip:  to the south of the High Prairie is the Columbia River.  Check out the Lyle Hotel (just off the river), Columbia Gorge Hotel (Hood River, OR) or the Skamania Lodge for a variety of accommodation styles for family travel, solo travelers and couples getaways.

On the westernmost peninsula of Washington State, the Olympic Peninsula, is a cove and point at Salt Creek.  From towering alders to mangled madronas on the cliffs, it’s a really great place to see the variety of trees that catch the most beautiful light during Pacific Northwest sunsets.  Here at Salt Creek, the view all of the way to the ocean is unobstructed.  Watching the sun dip below the horizon from a cliff or rocky jetty is nothing short of breathtaking.

What other Pacific Northwest sunsets should we capture and share?  We’re always looking for an adventure and no cove or mountain top is too far to trek for an amazing sunset.

Amazong pictures and loved the video :D What canera do you use?

As a standard, I have a lovely Cannon DSLR, but of all the posts to ask this question about, this ONE was done completely with an iPhone 5S. Totally random that this is all phone camera pics. :)

Wow gorgeous photos! Sunsets are such a beautiful time of day!

Marianne @ Mum on the Move

Beautiful! I love the video :)

Everyone loves a good sunset! I especially love the video you shot!