Having two dads isn’t the norm.  It’s true.  But gosh, it would be nice if we ran into more families like ours out there.  We do what we can to raise our kids just like any other parents do, but as they grow, we’ve got an extra step of calling out our family situation.  We don’t do it so they feel weird or anything, but so that they’re prepared for one day when a child questions them about having two dads.  We want the boys to be able to respond with confidence and comfort, especially because some kids just aren’t…tactful. 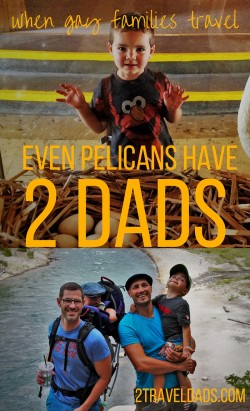 And traveling as two dads and two kids provides us the chance to experience the world beyond our little family unit.

I love when we find or people give us books that are about families with same-sex parents.  They’re great stories typically.  We really love the book Daddy, Papa and Me.  It was really helpful when our first son, Panda, was learning to talk and really starting to call us by name.  He was able to identify our characters and loved reading this story over and over.  Other books we’d read, he wouldn’t really talk about or want to read over and over, but this one he did.  We have lots of books with families in them, but not a lot that he really loved.

And I’m bad.  When there’s a book that I love, I’ll call the mom character “auntie” or “grama” so that the story is more relatable.  Some people might say that this isn’t a realistic thing to do, especially because the kids will ALWAYS see more mom/dad families than ones like ours, but I want us to feel more normal, even if at this point in life the kids don’t care or realize we’re different. 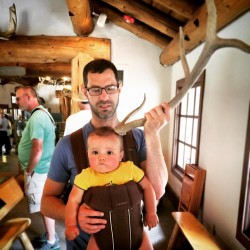 How does this have to do with traveling as a family?  Well, it’s rare that an opportunity comes up for our oldest to talk about our family structure to others.  He doesn’t usually point at a pod of orcas and say “Wow! Look at all of those daddy and papa whales!”  He doesn’t see turtles at the zoo and comment “That baby turtle is so lucky to have two moms.”  Until a certain point, I wasn’t sure that he realized that we were different than all of the people and animals we’d seen, and that was okay, I guess.  I mean, that’s the goal:  normalcy.  Then comes family vacation to Yellowstone National Park.

Talk about seeing a LOT of families.  Everywhere.  Elk families, bison herds, swan wedges, tourist groups.  We were inundated with so many different people and animals to see, there just had to be another gay family among the millions.  Nope, not that we met or saw.  Well, that’s fine, not unusual.  And then we came to the Bridge Bay Visitor Center in the Park.  This is an interesting place as its focus is on bird species and is full of amazing taxidermy work. 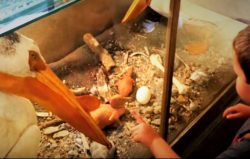 As we wandered through, Oliver (our oldest) went off on his own and when I caught up with him, we was either talking to himself or trying to talk to the older lady behind him, and explaining the taxidermy pelican family.  What I heard:

The lady behind him was listening and had a stale look on her face as she watched him.  As I walked up to Oliver, I asked him to explain it to me one more time because I couldn’t hear him, and I caught what I think is my favorite video of him ever.  He again explained it but this time equated each of the birds to us.  He identified that this pelican family was just like ours.   After he was done explaining again, he looked up at the lady again to ensure she understood, and then she moved on.

Was it a for-real gay bird family?  We’ll never know and it doesn’t matter.  What I was so proud of was that he was able to identify and explain his family to a stranger and he did it with great confidence.  I always worry that he’ll question some aspect of us some day, just because there are people that will try to plant that seed.  Seeing him talk about his papa, daddy and brother with pride made me beam.  Oliver talks about mama and daddy animals all of the time, but it felt good to see him identify with another family like ours.

Are we making a good impression as a family with two dads? 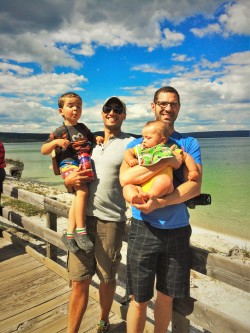 Did the woman he was trying to talk to think he was cute or understand that he wasn’t confused and that he really does have two dads?  I don’t know.  Did she leave the museum and call all her friends and tell them that she met a well-adjusted, intelligent child being raised by gay parents?  I doubt it.

I do know though that hearing a child talk about family and showing their pride is a beautiful way to make progress with others in the world and in my mind, that lady left there with a small smile and positive view of our family:  two dads and two kids.

This is why we travel with our kids.  True, we need a getaway just as much as the next parents, but also subtly sharing our story and family with the world is what we can do to pave the way for the next generation of gay parents.  We always talk about giving our kids a broad world view, but we can give the world a broader view too.

Originally written for Gays With Kids

Our neighbors in LA were two moms. When we lived there my son was pretty young and one day he came back from playing at his friends house and said, "Benjamin is so lucky to have two moms". It was so cute and wasn't meant in a way that didn't love his dad. It was just obvious that he thought it was so great. That is what came to mind when I read your story! Your kids are so lucky to have 2 Dads!

I love the 2 dad pelican story/video. so sweet. I like to think more kids are being raised to be tolerant of different family groups these days. We are a mixed-race family ourselves and we also stand out for being different. My kids are just so used to their norm that they don’t think that a lot of families out there have two parents the same skin colour. Our basic story to them has been there is no one way to make a family.

The video is so sweet.Children are so innocent and untouched by the prejudices of adulthood. I am sure the kids will grow with enhanced sensibility and maturity and will not be affected by the seeds that may be sown by others.