I went to Crescent City, California once when I was a kid.  I just remember being told that in 1964 a tsunami (tidal wave) crashed into the town… and then I was terrified of visiting Crescent City or any place on the coast.  Well, I’m a grown up now and Chris and I have been through Crescent City twice without succumbing to a tidal wave.  And we’ve also now experienced the beautiful Battery Point Lighthouse. 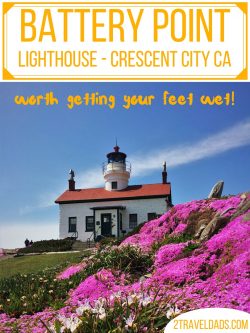 While it may not be your first choice for a vacation destination in California, Crescent City has some great characteristics that make is a cool stop over.  Even if you’re not spending the night, spend the day.

Set on a harbor with hills full of Redwoods behind it, Crescent City is pretty beautiful. The town itself isn’t dripp ing with charm like Eureka and its historic Victorian neighborhoods, but it’s homey and the people we met were all very friendly.  Everybody was ready to strike up conversation at any given moment. 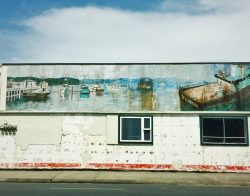 We had an awesome lunch at the 101 Hawaiian BBQ and got great service, wonderful food and it was just what we needed to recharge.  It was great to find some grub that wasn’t standard burgers and fries, which we all too often find when we’re on a road trip.

Tip:  when you’re bouncing from town to town, try to mix up what the family is eating.  We easily give in to burgers or fish n’ chips because we know the kids will eat them, but they love Mexican and Asian food too.  Remember to go for variety when you’re traveling. 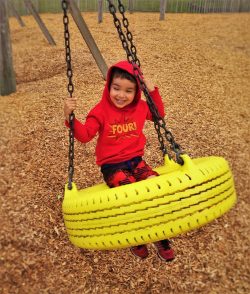 You know that we come with two kids, so we’re always looking for fun breaks in our travels that they’ll specifically appreciate.  That means that we look for open fields for running, fountains for splashing and parks.

On the way to the Battery Point Lighthouse we saw Beach Front Park and fell in love with it.  I actually dropped Chris and the kids off for some play time while I went to check out the lighthouse (but more on that in a sec).  The park was awesome!  There were different sections for different aged kids and all kinds of different activities.

In addition to the play area, there is a long walking path that goes along the harbor and provides beach access, so a stop here can be more than just playground time, but fun beachcombing time too!

Our kids are connoisseurs of parks.  Beach Front Park in Crescent City was truly a gem and gosh did we need it and that particular moment in our trip.

Tip:  like we called out in our article about the Carter House Inn in Eureka, finding a park for kids is a great way to use up energy and show them that their interests are important too. 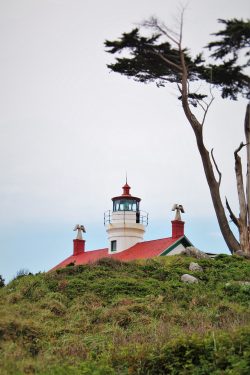 As you probably know, we visit almost every lighthouse that’s put in our path.  For us not to take time to visit, the lighthouse must be pretty inaccessible or super lame, like with no lantern or just a boring structure.  Battery Point Lighthouse in Crescent City wasn’t the most impressive structure, but was so cool though!

Getting to Battery Point Lighthouse

Like I said at the start, I got to visit the Battery Point Lighthouse twice on this trip through Crescent City.  The first time was when there was fog socking in the harbor.  I was alone because I’d dropped the fam off at Beach Front Park and I was in a really bad mood because I was tired and I was done with crappy weather.  I made the best of it though, parked in the area by the jetty and walked down the trail to the beach to get to the lighthouse.

Note:  some of our favorite lighthouses require a little jaunt to get to.  Trinidad Head Lighthouse is a hike around a huge rock and cliffs.  Point Wilson Light is a nice walk along the beach.  Cape Flattery Light is a hike to the very end of the continental United States.  Some sights are worth weird adventures to get to, right?  Keep reading. 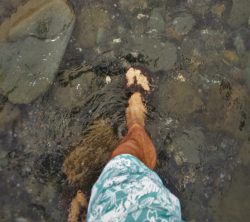 Um, so the Battery Point Lighthouse is actually on a head that’s separated from the land starting just after low tide begins to rise.  It’s basically the Mont Saint Michel of the West.  Okay, maybe not, but same tidal separation concept.  Upon my first visit I had to walk through the freezing cold ocean water to get out to Battery Point.  It wasn’t crazy far, but dayum!!!  So cold.

Tip:  no matter the level of the tide, it’s best to wear shorts and flip flops for a visit, as you’ll likely get splashed a bit, even at low tide.

Once across the tide it was an easy walk uphill to the Battery Point Lighthouse, the keepers’ quarters and the most beautiful lighthouse grounds I’ve ever been too.  Immediately my mood shifted and I was completely at peace with the weather and my day. 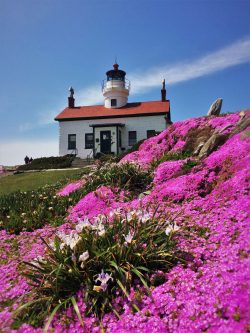 I had gotten to the Battery Point Lighthouse a bit early, so wasn’t able to enter, but there were plenty of paths around the point the I could wander and sit. I took advantage of all of them and took photos at each spot.

Note:  there are signs requesting that you stay off the rocks.  This is for your safety, so obey when you see signs like that.  Also, most lighthouses are controlled by the Coast Guard, which is a type of armed force, so you need to obey extra good.

After I had my own respite with the waves and lighthouse, I went back to fetch the family from Beach Front Park.  Okay, I went and played a bit too, but then collected them, and despite them not wanting to visit another lighthouse, I made them all go and they were glad that they did!

Disclaimer:  this was one time that I really am glad that I can be loud and selfish (within reason) because we had a completely awesome family outing. #winning 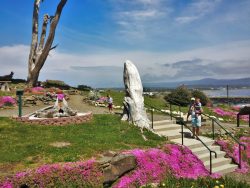 The tide had gone out further and there was only a tiny bit of water to cross, but it was doable without even getting splashed by waves.  Still a thrill for a four year old, but perfect for an adult wearing jeans.  We got to explore, enjoy all of the flowers… and the sun came out!!!  I thought the Battery Point Lighthouse was pretty cool before, but with sunshine and warm sea air, it became my favorite place on our whole trip along the Northern California coast.

Tip:  if your goal is to tour the Battery Point Lighthouse itself, know that it is a private residence in addition to being a functioning light station.  The visiting hours are random and rare, but props to you if you score and get to go in!

Tip 2:  if you’re a photographer, the Battery Point Lighthouse has lots of interesting angles and all kinds of beautiful vegetation surrounding it.  Get down on the ground, climb around on the hill, take cool pictures!!  Photos are always the best souvenirs! 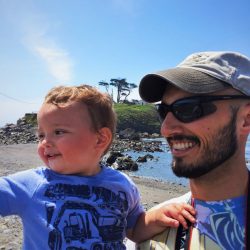 Where to begin… Let’s start with the sea lions that you don’t always see but you hear barking continually as you walk along the harbor from Beach Front Park to the Battery Point Lighthouse.  We only saw two of them, but you could hear a full rookery of sea lions in the bay.

Next up, you have to cross tide pools on your way to the Battery Point Lighthouse.  We love tide pools and try to explore them at every chance!  Here, we saw a lot of hermit crabs and sculpins (fish).  There were quite a few sea anemones too, but they were closed up by the time we got to them.

Learning opportunity:  tide pools are a mild obsession of ours.  Of each of us, not just me.  We have learned so much about the waters surrounding us and gotten to experience a lot of small wildlife up close.

And then there were birds.  We live across from the beach at home, so we’re very familiar with common sea birds on the west coast.  What we saw at Battery Point wowed us:  an eagle, osprey, sand pipers (by harbor), gulls, cormorants, pelicans and oyster catchers.  If you’re into bird watching this is a great place to see a wide variety of sizes and types.  So cool!

Tip:  always have a pair of small binoculars with you.  We got some cool kids ones when we stayed at the Tenaya Lodge at Yosemite, so luckily had them to be able to watch the birds down on the rocks.

Lastly, and this was a special treat, we saw grey whales!  We were walking around the Battery Point Lighthouse, just staring off into the sea.  As we approached an older couple sitting on a bench, I hear one remark “Wouldn’t it be great to see whales today?”  At that moment, I turned and looked out to sea just in time to catch a burst from a blowhole. We stood on the rocks together for a few minutes watching the whales, about 100 meters off the rocks, swimming northward and blowing every 30 seconds or so.  This was a highlight for us, and for the couple we met as they’d been on the coast for a week without seeing whales.

So, even if you’re not a brave soul that would normally wade across the tide, would you do it for a cool experience like this?  It’s totally worth it and if you’re there at a medium to low tide, you’ll leave with a great story… and maybe you’ll even see whales!!!

And if you listen to our advice and cross the tide…

Fantastic post Rob. Battery Point Lighthouse sounds like it was quite an adventure, the Sea Lions barking must have been awesome! We also love visiting lighthouses have visited 2 here in Durban, South Africa.

Your posts on Lighthouses hold a special charm for me and I love reading about them. This is another charming and romantic lighthouse. What are the pink/lavender flowers in the photos?

I love tide pools and I love the whole idea of crossing over through them. What fun!

My kids have yet to meet a lighthouse that they didn't want to climb. This would be right up there alley including with the extra adventure of wading through water. I had to look up Crescent City to see where it is. Unfortunately we won't be going to Northern California when we visit San Francisco in August but next time!

The place is great. I also travel to remote places which are not so touristic. It is much more interesting and I might be the only one to visit that place.